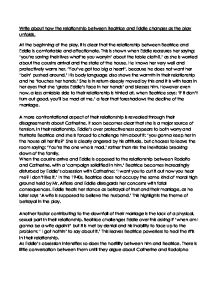 Write about how the relationship between Beatrice and Eddie changes as the play unfolds.

Write about how the relationship between Beatrice and Eddie changes as the play unfolds. At the beginning of the play, it is clear that the relationship between Beatrice and Eddie is comfortable and affectionate. This is shown when Eddie reassures her saying: 'you're saving their lives what're you worryin' about the table cloth?,' as she is worried about the cousins arrival and the state of the house. He knows her very well and protectively warns her, 'You've got too big a heart', because he does not want her 'bein' pushed around.' His body language also shows the warmth in their relationship and he 'touches her hands.' She is in return deeply moved by this and it is with tears in her eyes that she 'grabs Eddie's face in her hands' and blesses him. ...read more.

When the cousins arrive and Eddie is opposed to the relationship between Rodolfo and Catherine, with a 'campaign solidified in him,' Beatrice becomes increasingly disturbed by Eddie's obsession with Catherine: 'I want you to cut it out now you hear me? I don't like it.' In the 1940s, Beatrice does not occupy the same kind of moral high ground held by Mr. Alfiere and Eddie disregards her concerns with fatal consequences. Eddie treats her stance as betrayal of trust and their marriage, as he later says 'A wife is supposed to believe the husband.' This highlights the theme of betrayal in the play. Another factor contributing to the downfall of their marriage is the lack of a physical, sexual part in their relationship. ...read more.

All affection gone he is aggressive and no longer calls her 'B' a change, which symbolizes his attitude towards her. He says 'I want my respect' and becomes manipulative, to prevent her going to the wedding; 'You're going to be on my side or their side.' Although he now appears hostile towards her, Beatrice still shows her loyalty towards Eddie and her family, as she joins herself to him and his faults saying 'we all belong in the sewer' for what Eddie has done. Out of love for him she admits that no one else will do that: 'you want something else Eddie,' recognizing his incestual desires for what they are. Even as he lies there dying she remains stoically by his side, as a final act of love 'covering him with her body.' ?? ?? ?? ?? ...read more.