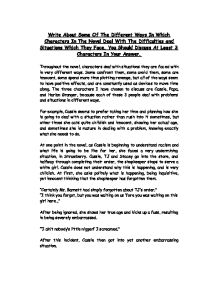 Write About Some Of The Different Ways In Which Characters In The Novel Deal With The Difficulties and Situations Which They Face. You Should Discuss At Least 3 Characters In Your Answer.

Write About Some Of The Different Ways In Which Characters In The Novel Deal With The Difficulties and Situations Which They Face. You Should Discuss At Least 3 Characters In Your Answer. Throughout the novel, characters deal with situations they are faced with in very different ways. Some confront them, some avoid them, some are innocent, some spend more time plotting revenge, but all of the ways seem to have positive effects, and are constantly used as devices to move time along. The three characters I have chosen to discuss are Cassie, Papa, and Harlan Granger, because each of these 3 people deal with problems and situations in different ways. For example, Cassie seems to prefer taking her time and planning how she is going to deal with a situation rather than rush into it sometimes, but other times she acts quite childish and innocent, showing her actual age, and sometimes she is mature in dealing with a problem, knowing exactly what she needs to do. At one point in the novel, as Cassie is beginning to understand racism and what life is going to be like for her, she faces a very undermining situation, in Strawberry. Cassie, TJ and Stacey go into the store, and halfway through completing their order, the shopkeeper stops to serve a white girl. ...read more.

She deals with them by carefully planning every single detail, and making sure she sticks to it. This way she manages to get her revenge, without getting into trouble. Even though he is an adult, and Cassie is only a child, Harlan Granger's ways of dealing with his difficulties and situations he is faced with is somewhat more immature, and less thought out. One of the main difficulties Mr Granger is faced with is that in 1887 and 1918, the Logans acquired 400acres of Granger land because of the Reconstruction. During the whole novel, Harlan Granger tries to get the land back off the Logans, but fails everytime, showing that his tactics are obviously a lot less thought out than Cassie's. Later on in the novel however, Granger's attempts to get the land back get more desperate, and cruel. He knows that the Logan's still have a mortgage on the land to pay, and he threatens to have the mortgage called up, knowing that they will lose the land because they cannot afford it. "Mr. Joe Higgins up at First National told me he that he couldn't hardly honour a loan to folks who go around stirrin' up a lot of bad feelings in the community -" "You ready to lose your land, David, because of this thing?" ...read more.

This results in uniting the community. "Papa stared out as a bolt of lightning splintered the night into a dazzling brilliance." He is clever, because like Cassie, he plans the situation before he goes through with it, working out how he can make the fire look accidental, realising that the lightning could have struck. He doesn't tell a soul or admit to it, so that no harm can come to him. "folks thinkin' that lightning struck that fence of yours and started the fire..." "It's better, I think that you stay clear of this whole thing now David..." "...Or somebody might start wondering about that fire..." For his final difficulty, Papa is faced with his four children asking what will become of their friend, TJ. He doesn't lie to them, and yet he doesn't directly answer their question when they ask if TJ could die, so he is not hurting them but they still know. "I ain't never lied to y'all, y'all know that." "Well, I... I wish I could lie to y'all now." To sum up Papa's character, he is very much like his daughter, calculating, clever, and planning everything, but he is much wiser, and doesn't act childish. His actions usually result in helping other people, they rarely hurt people unnecessarily. He is very unlike Harlan Granger, because he doesn't have his own private agenda. ...read more.