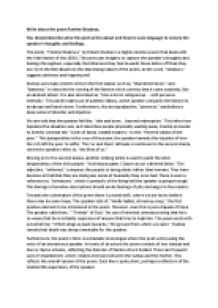 Write about the poem Famine Shadows. You should describe what Dunlop writes about and how he uses language to convey the speakers thoughts and feelings.

Transfer-Encoding: chunked ﻿Write about the poem Famine Shadows. You should describe what the poet writes about and how he uses language to convey the speaker?s thoughts and feelings. The poem, ?Famine Shadows,? by Robert Dunlop is a highly emotive poem that deals with the Irish famine of the 1800s. The poet uses imagery to capture the speaker?s thoughts and feelings throughout, especially the bitterness they feel towards those better off than they are. Even the title alludes to the depressing nature of the poem, as the word, ?shadows,? suggests darkness and lingering evil. Dunlop uses many violent verbs in the first stanza, such as, ?thundered down,? and, ?battered,? to describe the coming of the famine which conveys that it came suddenly, like an ambush attack. ...read more.

This ?us and them? attitude is continued in the second stanza, where the speaker refers to, ?the likes of us.? Moving on to the second stanza, another striking simile is used to paint the utter despondency of the Irish people: ?Workhouse gates / Gaunt as our withered limbs.? The adjective, ?withered,? compares the people to dying plants rather than humans. They have become so frail that they are losing any sense of humanity they once had. There is even a reference to, ?brimstone,? which is symbolic of the living hell the speaker is going through. This barrage of emotive descriptions should evoke feelings of pity and anger in the readers. Towards the culmination of the poem there is a tonal shift, where we are led to believe there may be some hope. ...read more.

The poem ends with a morbid line: ?Which drags us back towards / The ground from which we came.? Dunlop reveals that death was always inevitable for the speaker. Furthermore, the poem?s form is a dramatic monologue where the poet writes using the voice of an anonymous speaker. In terms of structure the poem consists of two stanzas and has no rhyme scheme, reflecting the disorder of famine-struck Ireland. There are frequent uses of enjambment, which creates a tension between the syntax and the rhythm. This reflects the overall tension of the poem. Each line is quite short, perhaps a reflection of the stunted life expectancy of the speaker. To conclude, Famine Shadows is a very dark and dismal poem that deals with one of the most unpleasant events in Ireland?s history. Dunlop skilfully uses language to let the reader gain an insight into the thoughts and feelings of the speaker. ...read more.