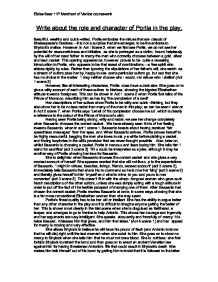 Write about the role and character of Portia in the play.

Write about the role and character of Portia in the play. Beautiful, wealthy and quick-witted, Portia embodies the virtues that are classic of Shakespeare's heroines-it is not a surprise that she emerges to be the antidote to Shylock's malice. However, in Act I Scene 2, when we first see Portia, we do not see her potential for resourcefulness and initiative, as she is portrayed as a victim, bound helplessly by the will of her dead father to marry the man who correctly chooses between a gold, silver and lead casket. This opening appearance, however, proves to be quite a revealing introduction to Portia, who appears to be that rarest of combinations-a free spirit who abides rigidly by rules. Rather than ignoring the stipulations of her father's will, she watches a stream of suitors pass her by, happy to see some particular suitors go, but sad that she has no choice in the matter. 'I may neither choose who I would, nor refuse who I dislike' (Act 1 scene 2) ...read more.

She appears worried that she will not live up to the expectations of Bassanio, 'I might in virtues, beauties, livings, friends, exceed account' (act 3 scene 2), immediately tells Bassanio that she is his to command as he is now her 'king' (act 3 scene 2) and literally gives herself to him 'myself and what is mine, to you and yours is now converted' (act 3 scene 2). This doesn't fit in with the sharp-tongued woman who gave such harsh descriptions of the other suitors, unless she was simply acting with a tough attitude in order to put off the fact of the terrible prospect of marrying one of them. After Bassanio had chosen the correct casket, Portia marries Bassanio at once, in some ways showing that she is a far more conventional Elizabethan woman than she may seem. Portia's finest quality has to be her wit or intellect. She has the ability to argue better than any other character in the play and it is difficult to imagine anyone getting the better of her. ...read more.

The fact that she can plan this trick just after Shylock's humiliation suggests that she has a very clear conscience over what had happened. In Act 5, Portia enjoys making Bassanio feel uncomfortable again and mocks him about the loss of the ring. She behaves like shylock; she has tricked Bassanio into swearing to a bond that she knows he cannot keep and then torments him for breaking it, going as far as saying she will sleep with the lawyer. Portia is very much in control of this marriage, despite her earlier statement that Bassanio was her lord. It is also fairly possible that Portia knew that Antonio's ships had not sunk, well before she went to the trial. Near the end of act 5, Portia gives Antonio a letter containing the news that the ships had not sunk, even though Portia herself had only just returned. If she did know of the letter before the trial, then it need not have taken place, as Antonio would have been able to pay Shylock, and the trial may well have taken place just for Portia's amusement. ?? ?? ?? ?? Eloise Sear 11P Merchant of Venice coursework ...read more.

I would suggest that in this case the introductory paragraph is used solely to introduce Portia as a character. It is not necessary to go into specific details from the play, this early in the essay. You should use the ...

I would suggest that in this case the introductory paragraph is used solely to introduce Portia as a character. It is not necessary to go into specific details from the play, this early in the essay. You should use the rest of the essay to pick apart specific scenes. The candidates response to the question is at times a little vague, they sometimes discuss parts of the play without saying how this gives an insight to PortiaÃ¢â‚¬â„¢s personality. It is essential to make sure that whatever you're discussing, you always come back to the main question.

There are instances in which the candidate simply retells part of the play, without giving any analysis or mentioning any further points. This is something you need to avoid as much as possible. It is often important to discuss certain scenes in a play, but you need to find a way to do this without retelling part of the story. You should discuss the characters thoughts and feelings, even if itÃ¢â‚¬â„¢s just a guess at how you think they might feel. It can also be interesting to the reader if you discuss how certain scenes might have been portrayed, and how Shakespeare made the key points of the play obvious to the audience. In addition you can achieve a higher grade by undergoing independent research, this shows your interest in the play and also makes the essay more interesting for the reader. I would like to point out that there are places in which the candidate refers to Portia as an Elizabethan woman, and although Shakespeare wrote the play at this time, the character Portia is Italian, she was born and lives in Belmont, Italy. The term Elizabethan refers to a British person of this time period. If youâ€™re unsure of a fact, I suggest that you do some research to check whether or not it is accurate. Finally there is no real conclusion to this essay. A conclusion should answer the initial question, summarise your key points and ideas and include your personal opinions (in this case your opinions of the character Portia). This is important as it brings the essay to a close and gives you a chance to leave the reader with a good impression.

The candidate fails to mention Shakespeare's use of language, and how he writes in way that catches the audience attention. It is necessary to discuss the use of linguistic techniques, such as metaphors and similes, in order to achieve a higher grade at this level. However the candidate does seem to have a good vocabulary and there is no real issue with spelling, grammar or punctuation throughout the essay. Overall the essay is coherent and easy to read. This is an example of the type of work I would expect from an average C grade candidate.