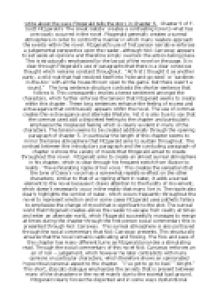 Write about the ways Fitzgerald tells the story in Chapter 5 of The Great Gatsby..

﻿Write about the ways Fitzgerald tells the story in Chapter 5. Chapter 5 of F. Scott Fitzgerald?s ?The Great Gatsby? creates a contrasting tone to what has previously occurred in the novel. Fitzgerald generally creates a surreal atmosphere in order to control the manner in which many readers approach the events within the novel. Fitzgerald?s use of first person narrative enforces a judgemental perspective upon the reader, although Nick Carraway appears to set aside all opinions and therefore simply overlook the action-taking place. This is structurally emphasized by the layout of the novel on the page. It is clear through Fitzgerald?s use of paragraphs that there is a clear conscious thought which remains constant throughout. ?At first I thought it as another party, a wild rout that had resolved itself into ?hide-and-go-seek? or ?sardines-in-the-box? with all the house thrown open to the game. ...read more.

?The exhilarating ripple of her voice.? This creates the sensation that the tone of Daisy?s voice has a somewhat repetitive effect on the other characters; similar to that of a rippling effect in water, it adds a surreal element to the novel because it draws attention to the fluidity of movement, which doesn?t necessarily occur in the reality that many live in. The ripple also clearly highlights the symbol of water, which occurs frequently throughout the novel to represent emotion and in some cases Fitzgerald uses pathetic fallacy to emphasize the change of mood that is significant to the plot. The surreal world that Fitzgerald creates allows the reader to escape from reality at times and enter an alternate world, which Fitzgerald successfully manages to merge at times during the chapter through the first person social commentary this is presented through Nick Carraway. ...read more.

Much of the dialogue used clearly highlights the tense atmosphere that is continuous throughout the chapter, yet it is executed in such a way that it becomes easier to sympathise with individual characters, it almost seems that the truth is revealed during this chapter in terms of characters? personalities. Much of this chapter relies upon the surreal atmosphere that Fitzgerald creates through many literary techniques. In particular chapter 5 adds a certain element to the rest of the novel, so that the reader becomes more aware of what is to come later on in the novel. ?The Great Gatsby? uses prolepsis in some instances in order to prepare the audience for future events. ?Then in a grave murmur.? This implies that some form of death is later to occur in the death. This technique allows the reader to apply their curiosity to the novel to possibly speculate what is to be the final downfall of the novel. ...read more.