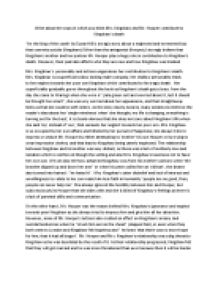 Write about the ways in which you think Mrs. Kingshaw and Mr. Hooper contribute to Kingshaw's death in 'I'm the King of the Castle' by Susan Hill.

﻿Write about the ways in which you think Mrs. Kingshaw and Mr. Hooper contribute to Kingshaw's death 'I'm the king of the castle' by Susan Hill is a tragic story about a neglected and tormented boy that commits suicide (Kingshaw).Other than the antagonist (Hooper),I strongly believe that Kingshaw's mother and her partner Mr. Hooper play a huge role in contribution to Kingshaw's death. However, their past also affects who they are now and how Kingshaw was treated. Mrs. Kingshaw's personality and actions engenderes her contribution to Kingshaw's death. Mrs. Kingshaw is a superficial widow lacking male company, her shallow personality leads to her neglect towards her poor son Kingshaw which contributed to his tragic death. Her superficiality gradually grows throughout the book as Kingshaw's death gets closer, from the day she came to Warings when she wore a " jade green suit and worried about it ,lest it should be thought too smart", she was very worried about her appearance, and that straightaway hints us that she could be self-centric. ...read more.

Mrs. Kingshaw's utter disbelief and lack of interest and unwillingness to relate to her son made him lose faith in humanity "people are no good, then, people can never help me". She always ignored the hostility between him and Hooper, but subconsciously its Hooper that she sides with and she is blind of Kingshaw's feelings as there is a lack of parental skills and communication . On the other hand , Mr. Hooper was the reason behind Mrs. Kingshaw's ignorance and neglect towards poor Kingshaw as she always tried to impress him and give him all her attention. However, some of Mr. Hooper's actions also created an effect on Kingshaw's misery and suicidal tendencies when he "struck him across the cheek" (slapped him),or even when they both went to London and Kingshaw felt hopeless and " he knew that there was no more hope for him, that it had all begun?. Mr. Hooper and Mrs. Kingshaw's relationship was a big threat to Kingshaw as he was desolated by the result of it. ...read more.

Susan Hill used a good amount of smart techniques that influence on the reader's feelings. The main technique that made the reader feel sympathy towards Kingshaw was showing all the negative things from his perspective, this personally made me enraged at Mrs. Kingshaw and Mr. Hooper's naive actions. The author also tends to focus an insight into the characters thoughts, and that makes it easier for the reader to understand how the character is feeling at certain times. Hill uses accurate and deep descriptions throughout the story, especially when describing Kingshaw as he "felt the sobs of terror rising into his throat, squeezing the muscles until they ached". There's also a fair use of symbolism and pathetic fallacy using the weather : ?angry clouds? and ?a cruel wind? to relate to Kingshaw's feelings and thoughts. Susan Hill really affected my feelings of sympathy towards poor Kingshaw and my feelings of anger towards his insensitive selfish mother and her partner. In conclusion, I think that Mrs. Kingshaw and Mr. Hooper heavily contributed to Kingshaw's death, especially his mother who abandoned him and continued to disbelieve him. Their past shouldn't have been a block for their future personalities. ...read more.