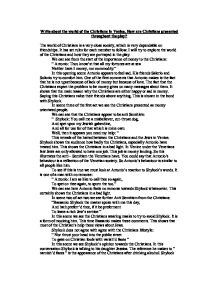 Write about the world of the Christians in Venice. How are Christians presented throughout the play?

Write about the world of the Christians in Venice. How are Christians presented throughout the play? The world of Christians is a very close society, which is very dependable on friendships. It has set rules for each member to follow. I will try to explore the world of the Christians and how they are portrayed in the play. We can see from the start of the importance of money to the Christians: " Antonio: Thou know'st that all my fortunes are at sea Neither have I money, nor commodity." In this opening scene Antonio appears to feel sad. His friends Salerio and Solanio try to comfort him. One of the first comments that Antonio makes is the fact that he is not upset because of lack of money but because of love. The fact that the Christians expect the problem to be money gives us many messages about them. It shows that the main reason why the Christians are either happy or sad is money. ...read more.

It is a form of mocking him. This time Bassanio makes these comments. This shows that most of the Christian's help these views about Jews. Shylock does not agree with agree with the Christians lifestyle: " Nor thrust your head into the public street To gaze on Christian fools with varish'd faces " In this scene we see Shylock's opinion towards the Christians. In this conversation Shylock is talking to his daughter Jessica. The reference he makes to " varnish'd faces " is the appearance of the Christians after drinking alcohol. Shylock clearly disagrees with the drinking of alcohol. The Christians make no secret of their fondness for it. This causes friction between the two groups. In this case Christians are presented in a bad light again. They are viewed as the bad group due to their alcohol consumption. Jessica shows little remorse towards her father: " For I am asham'd of my exchange: But love is blind, and lovers cannot see. ...read more.

At the hands of the Christian's he has been stripped of all his belongings. The Christian's show no remorse and force Shylock to become a Christian. This would have been very serious to a devout Jew like Shylock. Despite this Gratiano continues to mock him throughout the court scene. The fact that Shylock has been wrecked at the hands of the Christian's must make them appear bad. In fact this is not strictly true because this is only in reply to the pressure the Shylock has put Antonio under. In the final scene we see the Christian's in a much better mood: "Lorenzo: The moon shines bright. In such a night as this, When the sweet wind did gently kiss the trees, " After the upheaval of the bond and fears that Antonio's ships have been lost at sea we see the Christian's settle into what they appear to be. Fun loving peaceful individuals. Lorenzo and Jessica discuss lovers of the past. We can see this by the emotive, natural language used by Lorenzo. This shows the readers that perhaps the Christian's are not so bad after all. This is also highlighted by Antonio's language. ...read more.