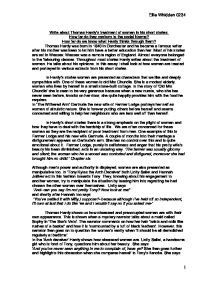 Write about Thomas Hardy's treatment of women in his short stories. How far do they conform to the social Norms?

Write about Thomas Hardy's treatment of women in his short stories. How far do they conform to the social Norms? How far do we know what Hardy thinks through them? Thomas Hardy was born in 1840 in Dorchester and he became a famous writer after his mother was keen to let him have a better education than her. Most of his stories are set in Wessex. Wessex was a remote region of England. Almost everyone belonged to the 'labouring classes. Throughout most stories Hardy writes about the treatment of women. He talks about his opinions. In this essay I shall look at how women are treated and portrayed in various extracts from his short stories. In Hardy's stories women are presented as characters that we like and deeply sympathise with. One of these women is old Mrs Chundle. She is a modest elderly woman who lives by herself in a small stone-built cottage. In the story of 'Old Mrs Chundle' she is seen to be very generous because when a new curate, who she has never seen before, knocks on her door, she quite happily provides him with the food he requires. In 'The Withered Arm' Gertrude the new wife of Farmer Lodge portrays her self as women of altruistic nature. She is forever putting others before herself and seems concerned and willing to help her neighbours who are less well off than herself. In Hardy's short stories there is a strong emphasis on the plight of women and how they have to deal with the hardship of life. ...read more.

She, who is a class of a milking maid, is sent to live in a small cottage on the outskirts of society and is faced with the result of this regretful relationship day in and day out; her son. By illustrating these points and others Women are seen to be made to feel restricted, shamed and unhappy by the strict social conventions. In all three stories of 'The Arch Deceiver', 'The Withered Arm' and 'The Son's Veto' Thomas Hardy shows that women often sacrifice their own self-esteem and dignity through an act of desperation. In 'The Arch deceiver' Tony Kytes, a man who is quite the women's favourite, flirts with women and proposes to them almost willy-nilly. He proposes to two girls, who both turn him down, in front of his fianc�e, Milly. After witnessing both the girls turn Tony down, Milly still agrees to marry Tony. Thomas Hardy presents Milly as a woman who is willing and prepared to sacrifice her dignity because she is desperate to get married. A similar set of events happen when Gertrude, from 'The Withered Arm' is forced to make a sacrifice. Gertrude, the owner of the disfigured arm, has tried every medicine which is available to her to cure her arm. Local people have suggested that she go to a man called Conjure Trendle. He however is of lower class than her. Gertrude and her dignity of class will not allow her to mix and consult with people like Conjure Trendle. ...read more.

Alongside the village labours in Wessex lived the lord and lady of the manor. Many of the worker's cottages were rented out and could be reclaimed by the Lord and the workers evicted. As a result of this the class system remained rigid. This affected women highly and citizens were encouraged not to marry anybody of a lower class than themselves. Through Hardy's presentation of Women I think that Hardy disapproves of some of societies conventions. I think that he disagrees with society's class system. In both 'The Withered Arm' and 'The Son's Veto' he portrays people who belong to the upper class as arrogant, uncaring people. For example both Farmer Lodge and the trained vicar Randolph treat women badly. He often portrays women of a working class to be unhappy and eventually isolated from society. Thomas Hardy, who originated from a rural working class environment, appears to hate the division between the upper and lower classes. He also comments on rural society and encourages the reader, like himself, to sympathise with the under-dog of society which mostly tended to be women. However, in 'Tony Kytes the Arch Deceiver' Hardy could be seen to be poking fun at the expense of some of his characters. He portrays Hannah Jolliver and Unity Sallet as having a fickle nature - but then they are all from the same class. To conclude, Hardy often used women in his novels to represent the oppressed and encouraged his readers to sympathise with their plight. By making his characters behave in a stereotypical way, Thomas Hardy is able to convey his sympathy with the working classes, generally through the presentation of women. Ellie Whidden 0234 1 ...read more.