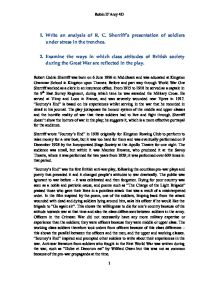 Write an analysis of R. C. Sherriffs presentation of soldiers under stress in the trenches and examine the ways in which class attitudes of British society during the Great War are reflected in the play.

1. Write an analysis of R. C. Sherriff's presentation of soldiers under stress in the trenches. 2. Examine the ways in which class attitudes of British society during the Great War are reflected in the play. Robert Cedric Sherriff was born on 6 June 1896 in Middlesex and was educated at Kingston Grammar School in Kingston upon Thames. Before and part way through World War One Sherriff worked as a clerk in an insurance office. From 1915 to 1918 he served as a captain in the 9th East Surrey Regiment, during which time he was awarded the Military Cross. He served at Vimy and Loos in France, and was severely wounded near Ypres in 1917. "Journey's End" is based on his experiences whilst serving in the war that he recorded in detail in his journal. The play juxtaposes the honour system of the middle and upper classes and the horrific reality of war that these soldiers had to live and fight through. Sherriff doesn't show the horrors of war in the play; he suggests it, which is a more effective portrayal for the audience. Sherriff wrote "Journey's End" in 1928 originally for Kingston Rowing Club to perform to raise money for a new boat, but it was too hard for them and was eventually performed on 9 December 1928 by the Incorporated Stage Society at the Apollo Theatre for one night. ...read more.

The request for this nepotistic action shows that Raleigh doesn't comprehend the magnitude and seriousness of the war. Most of the conversations held between the officers throughout the play are held in a jolly manner, to distract from the horrific situation they are in. Sherriff shows how understatements were used by officers to distance themselves - after a raid in which many people were killed one of the officers makes the comment "There's nothing worse than dirt in your tea." Sherriff shows how the officers created parallels with home to help cope by bringing a sense of familiarity to the trenches in their habits and actions. Even when planning an attack on the German frontline, the colonel invites Stanhope to dinner. The playwright shows how people moved on and the war effort continued even after tragic losses when the officers have a grand dinner to celebrate the raid in which seven men and an officer were killed. Luxuries such as champagne and chicken helped them distance themselves from the horror of what had occurred because they could not cope with such emotional trauma if they did not try to forget it. The distance in No Man's Land was described in "rugger fields" because it is something that they could relate to. Sherriff further reinforces the representation of Raleigh as the ignorant public after he is traumatised by a raid, and confronts Stanhope as to why he can celebrate when Osborne died. ...read more.

The classes have certain agreements within themselves, for example the upper class officers don't read each other's letters even though the rules dictate they should. The lower class soldiers don't mix with the officers, and Stanhope tells Raleigh off for doing so. He asks Raleigh, "Have you been feeding with the men?" implying that the men are sub-human and not worthy of being addressed in the same way as someone of a higher class. Sherriff shows how in some ways Trotter is an outcast in the group of middle class officers because of his working class origins and mannerisms. This is shown when Osborne does not want to discuss Hibbert behind his back with Trotter. The officers are seen by the men as leaders because they are of a higher rank and class, so for the raid the colonel has to pick one to lead the assault, rather than use a non-commissioned officer of a lower class such as a sergeant. Sherriff shows this clear class separation when Osborne asks Hardy where the men sleep, and Hardy replies that the sergeant sorts it out; i.e. he is too high class to bother with the men. As "Journey's End" is based around officers and their experience of the trenches, the low-ranking soldiers do not appear in the play much. Sherriff represents them and his views about them through the characters Mason and Trotter. These views may be slightly biased, but they are fairly accurate representations of what people of different classes were like. ...read more.