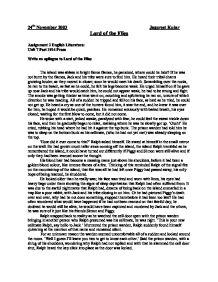 Write an epilogue to Lord of the Flies.

24th November 2003 Jaspreet Kular Lord of the Flies Assignment 2 English Literature: Unit 7 Post 1914 Prose Write an epilogue to Lord of the Flies The island was ablaze in bright fierce flames, he panicked, where could he hide? If he was not burnt by the flames, Jack and his tribe were sure to find him. He heard their tribal chants growing louder, as they moved in closer; soon he would meet his death. Scrambling over the rocks, he ran to the beach, as fast as he could, he felt his legs become weak. He urged himself on if he gave up now Jack and his tribe would catch him, he could not appear weak, he had to be strong and fight. The smoke was getting thicker as time went on, couching and spluttering he ran on, unsure of which direction he was heading. All of a sudden he tripped and fell on his face, as hard as he tried, he could not get up. He heard a cry as one of the hunters found him, it was the end, and he knew it was over for him, he hoped it would be quick, painless. He remained anxiously with baited breath, his eyes closed; waiting for the first blow to come, but it did not come. ...read more.

Ralph snapped back to reality as he watched the cell door open with the prison warden bringing in another person who Ralph presumed was his cellmate, he was right. 'This is your new cellmate Ralph, say hello to Jack.' Murmured the prison warden, Ralph suddenly found himself quivering at the mention of that name and remained silent. For an unknown reason the warden seemed uncomfortable all of a sudden and looked around the room. 'Well I guess I'll leave you two to get to know each other.' Said the prison warden, with a shrug of his shoulders, wondering why Ralph had not replied and with that he slammed the cell door shut, Ralph heard the key click into place as the door was locked. Then he turned to look at his cellmate, Jack stood in the middle of cell, and discarded his things onto the floor. He was slightly taller than Ralph with broad shoulders and dark eyes that seemed to hide a mysterious past. Ralph searched his face and realised he had seen Jack before, where exactly he was unsure of but he was certain they had met before he knew that much. Then Jack spoke, something which Ralph did not expect. ...read more.

'No I can understand why you'd want to know that. I'm going to be in prison longer than you because I didn't kill one person, I killed two. I don't regret it either, they were meant to die. As Jack said this something unusual gleamed in his eyes, something evil that made Ralph uncomfortable at first, then all at once it struck him, Ralph remembered where he had seen Jack; he was the same person who had killed Piggy, he had recognised that shine in his eyes, he had looked exactly the same when Piggy had fallen to his death off the cliff of the island. Slowly a cold feeling swept over his body, a chilling fear; fear of Jack discovering his real identity. He was going have to be careful, stay out of Jack's path, but he knew it would not be easy, Jack was his cellmate. 'Are you alright?' Ralph jumped as he realised Jack was speaking to him; he quickly nodded 'I'm just tired that's all.' He walked over to his part of the bunk and lay down turning his back on Jack, pretending to be sleeping. He was going to have to do something about the situation Ralph thought to himself, and how soon was it before Jack remembered who he was? Then all of a sudden he knew what he had to do, he had to kill Jack, but the question was how? ...read more.