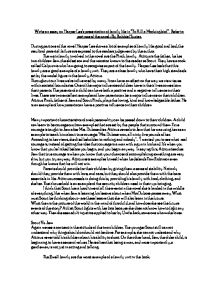 Write an essay on Harper Lee's presentation of family life in "To Kill a Mockingbird". Refer to part one of the novel-By Robbie Hunter. During part one of the novel Harper Lee shows a lot of examples of family life: good and bad, the results of parental failure are exposed to the readers judgement by the author. The main family involved in the novel are the Finch family. Atticus is the father, he has two children: Jem ,the eldest son and the narrator known to the reader as Scout. They have a cook called Calpurnia who I am going to recognise as part of the family. Harper Lee feels that this family are a good example of a family unit. They are a close family who have their high standards set by the model figure in the family, Atticus. Throughout our lives we're influenced by many. It can have an effect on the way we view issues within societal boundaries. One of the major influences children have in their lives comes from their parents. The parents of a child can have both a positive and a negative influence on their lives. There are two excellent examples of how parents can be a major influence on their children. ...read more.

At first Scout fights with her fists because she does not know how to fight any other way. Then she sees adult injustice applied to her by Uncle Jack, some one whom she loves. Scout Vs. Jem Again we see a contrast in the attitude of the two children. The younger Scout still cannot understand why things should or should not be done. For example, she cannot understand why Atticus never told his children about his ability to shoot. On the other hand, Jem, the older child, is beginning to have a sense of values. He realizes that being a man, and more importantly, a gentleman, is not just in acting and talking. The Ewell family are the worst example of a family unit in the book. Bob Ewell, father of Mayella Ewell, plays the drunken, abusive, and neglectful father. He is an example of how a parent can be a negative influence on their children's lives. Bob Ewell does not provide his children with any kind of stability, but rather provides only for himself and his drinking habits. Their household is described as being a dump. Nobody really knew how many Ewell children there were, "Some people said six, others said nine; there were always several dirty-faced ones at the windows when anyone passed by." ...read more.

Possibly he might feel a little injustice in what has happened to his brother. I think that Harper Lee is making members of the Radley family a little too much like machines. Norman Radley would have to spend most of his days being occupied with looking after Boo. But more importantly keeping other people away from where he is and dismissing rumor around the place. This occupation is shown by times like when he cements up the hole in the tree that the Finch children are using to communicate with Boo. The Cunninghams are a mixture of both a good example of a family unit. Their honesty is very highly complimented by Lee. The fact that the children are probably a bit unprotected and not living the average lives of normal kids like the finches rubs off badly on them but they make the most of what they have, their land, and never take advantage of others. I think that Harper Lee believes that a childs parents are the main thing that models a child in to a fully formed adult. She has her own views on what good people and bad people are yet accepts that nobody is the 'perfect10'. I think that her views are cast in to the readers minds through Atticus and he has the closest mind to hers. By Robbie (Booey) Hunter ( 1283 words) ...read more.