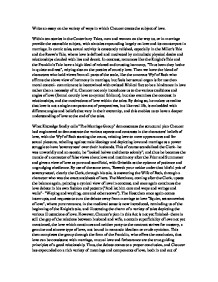 Write an essay on the variety of ways in which Chaucer treats the subject of love. Within ten stories in the Canterbury Tales, men and women on the way to, or in marriage provide the ostensible subject, with six tales expounding largely on love and its counterpart in marriage. In comic tales, sexual activity is constantly relished, especially in the Miller's Tale and the Reeve's Tale, where love is defined and motivated by animalistic physical desire and relationships clouded with lies and deceit. In contrast, romances like the Knight's Tale and the Franklin's Tale have a high ideal of relaxed and trusting harmony, "Thus been they bothe in quiete and rest", relying also on the poetics of courtly love. Then we have the blend of characters who hold views from all parts of the scale, like the amorous Wyf of Bath who affirms the above view of harmony in marriage, but feels her sexual organ is for use than moral control- commitment is intertwined with twisted Biblical fact to be a hindrance in love rather than a necessity of it. Chaucer not only introduces us to the various traditions and angles of love (formal courtly love to cynical fabliaux), but also examines the contrast in relationships, and the motivations of love within the tales. By doing so, he makes us realize that love is not a single compartment of perspectives, but like real life, is embedded with different angles ...read more.

This then completes the group through the form of the Franklin, who offers the conclusion, that love can be consistent with marriage, mutual love and forbearance are the true guiding principles of a good relationship. Thus, the debate comes to a proper conclusion, and Chaucer has expounded on a rich variety of meanings and components of love, both in and out of marriage, the overall structure fusing both the political and domestic spheres to provide a rich and thorough discussion of love, and including slight contemplations of religious love through the discussion of St Cecilia and her angel Tirburce later on. Examining this complex literary structure, one can distinguish varying perspectives or traditions of love, beginning with the expression of courtly love by the Knight and a later follow through by the Squire. Their perspective of love follows the tradition of Troubadour poets of Southern France in the eleventh century, with the notion that true love can only exist outside of marriage; that true love may be idealized or spiritual, and may exist without ever being physically consummated; and that a man becomes the servant of the lady he loves. Thus the entrance of Arcite and Palamon in the Knight's tale, where Emelyn becomes the elevated goal of their affection, and each lover laments of their state, Arcite in Boethian style against Fortune because he cannot see Emelyn, "To love my lady, whom I love and serve", and Palamon blames Saturn for his imprisonment for he cannot see Emelyn. ...read more.

However, the Miller's Tale coming directly after the Knight's Tale does remind us of the facts of common reality, and love as viewed from the eyes from the lower classes, and the idealistic view of the Knight's Tale seems too idealistic and misplaced from the actual reality. This cynicism is further portrayed by the Wyf of Bath, who speaks of the 'wo' that is in marriage, and how she did not manage to gain actual satisfaction from love in any marriage, "For myn entente is nat but for to pleye", her marriages for her had no actual emotional value, "That I ne tolde no deyntee of hir love". She demands mastery in love, and even for her fifth husband which she admits she truly loved, he used violence on her, "And with his fist he smoot me on the heed". And yet even as she brags about her shameless manipulation of her husbands and the control women must have over their husbands who will go astray, yet she admits to her romantic nature, and reveals a deep fondness for the one man she could not control. Love in this instance, is presented in a pessimistic light, with no actual compromise or everlasting satisfaction, a power struggle which one must maintain tirelessly to try to gain control over the household. Despite this, the last contradiction reveals a certain softness and belief in actual harmony in love, I was to hym as kynde 824: As any wyf from denmark unto ynde ...read more.