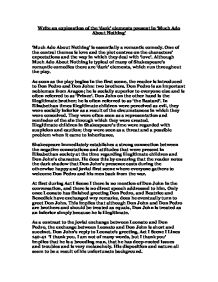 Write an exploration of the 'dark' elements present in 'Much Ado About Nothing' 'Much Ado About Nothing' is essentially a romantic comedy. One of the central themes is love and the plot centres on the characters' expectations and the way in which they deal with 'love'. Although Much Ado About Nothing is typical of many of Shakespeare's romantic comedies there are 'dark' elements, which run throughout the play. As soon as the play begins in the first scene, the reader is introduced to Don Pedro and Don John: two brothers. Don Pedro is an important nobleman from Aragon; he is socially superior to everyone else and is often referred to as 'Prince'. Don John on the other hand is the illegitimate brother; he is often referred to as 'the Bastard'. In Elizabethan times illegitimate children were perceived as evil, they were socially inferior as a result of the circumstances in which they were conceived. They were often seen as a representation and reminder of the sin through which they were created. Illegitimate children in Shakespeare's time were regarded with suspicion and caution; they were seen as a threat and a possible problem when it came to inheritance. Shakespeare immediately establishes a strong connection between the negative connotations and attitudes that were present in Elizabethan society at the time regarding illegitimate children and Don John's character. He does this by ensuring that the reader notes the dark shadow that Don John's presence casts during the otherwise happy and jovial first scene where everyone gathers to welcome Don Pedro and his men back from the war. ...read more.

'And what have I to give you back, whose worth May counterpoise this rich and precious gift?' Claudio then proceeds to publicly humiliate Hero, referring to her as a 'rotten orange'. He uses this description in the context that Hero has deceived him and is 'but the sign and semblance of her honour.' She has been putting on an act and her outward perfection hides her rotten insides. Claudio describes Hero's crime in an excessive way, in order to make it sound as bad as possible. He taunts her, as she describes how 'She knows the heat of a luxurious bed.' This makes her sound lustful, as though she instigated the encounter and revelled in it. Claudio takes subversive delight in the shaming Hero publicly, seeing it as revenge and a way of protecting his reputation. In Act IV Scene I Shakespeare showcases some of the worst aspects of human character in certain characters behaviour towards Hero. Along with Claudio's obvious cruelty, another example of this is Leonato's reaction and subsequent behaviour towards Hero after Claudio has accused Hero of being unfaithful. He immediately turns against his own daughter, Claudio's accusation along with Don Pedro's acknowledgement leave him with no doubt in his mind that Hero is guilty. Leonato's violent and frantic behaviour indicate that although he loves his daughter, his respect for Don Pedro and Claudio lead him to believe them without even questioning them or Hero. His treatment of Hero is extremely unfair and unjustified, as well as rash and maniacal. ...read more.

The final scene of Much Ado About Nothing is typical happy ending, but there are still questions, which can be raised about the characters futures. Will Claudio and Hero be happy together? And will Beatrice and Benedick last? And there is always the question of Don Pedro, it seems everyone is now attached except for Don Pedro, will he ever be happy and find his match? I feel that Claudio and Hero's relationship will last, although it will be due to the fact that Hero is prepared to play the role of a typical Elizabethan wife, who is gentle, forgiving and submissive. On the other hand Beatrice and Benedick's marriage is sure to be extremely tempestuous and fiery, this all due to the fact Beatrice is the total opposite of Hero. Beatrice is loud, brash, extremely intelligent and definitely not afraid to voice her opinions. There is also a slight shadow of doubt that if Benedick broke Beatrice's heart once before, he is surely capable of doing it again, but what I think is clear is that they do share a genuinely true love for each other, which I am not sure if Claudio and Hero do. There is a slight shadow cast over the end of the play, where a messenger brings the news that Don John, who fled after being caught, has been found and is being brought back to Messina. This raises questions over what exactly will happen to him when he returns and how he will be punished. In conclusion although Much Ado About Nothing has a 'happy ending' Shakespeare never quite makes it clear whether they'll all live happily ever after. ...read more.