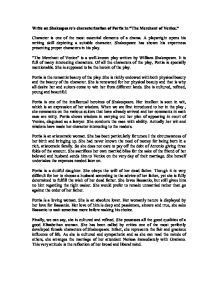 Write on Shakespeare's characterization of Portia in &quot;The Merchant of Venice.&quot;

Write on Shakespeare's characterization of Portia in "The Merchant of Venice." Character is one of the most essential elements of a drama. A playwright opens his writing skill depicting a suitable character. Shakespeare has shown his expertness presenting proper characters in his play. "The Merchant of Venice" is a well-known play written by William Shakespeare. It is full of many interesting characters. Of all the characters of the play, Portia is specially mentionable. She is supposed to be the heroin of the play. Portia is the romantic beauty of the play. She is richly endowed with both physical beauty and the beauty of the character. She is renowned for her physical beauty and that is why all desire her and suitors come to win her from different lands. ...read more.

So she does not care to pay off the debt of Antonio giving three folds of the amount. She sacrifices her own married bliss for the sake of the friend of her beloved and husband sends him to Venice on the very day of their marriage. She herself undertakes the expenses needed later on. Portia is a dutiful daughter. She obeys the will of her dead father. Though it is very difficult for her to choose a husband according to the advice of her father, yet she is fully determined to fulfill the wish of her dead father. She loves Bassanio, but still gives him no hint regarding the right casket. She would prefer to remain unmarried rather than go against the order of her father. ...read more.

Later on she herself goes in the guise of a lawyer with her attendant Nerissa to Venice in order to discharge her duties as a lawyer. In the court she displays the finest wit and technique that a lawyer ever possesses. Consequently she saves the life of Antonio from the serious and horrible consequence. In this trial she wins the favour and praise of all the audience and also of the readers. Besides, when she demands nothing but the ring, we also find her intellect there. At last when the play almost comes to an end, she reveals the fact what happened in the mean time. In fine, we cannot deny the fact that Portia's character is a beautiful blend of intellect and womanly charm. Generally all the heroines of Shakespeare emerge Victorians at the end winning the favour and sympathy of the readers and audience. So, Portia is not exception to this norm. ...read more.