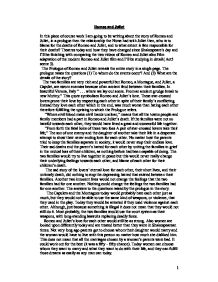 Romeo and Juliet In this piece of course work I am going to be writing about the story of Romeo and Juliet, in a prologue then the relationship the Nurse had with Juliet then, who is to blame for the deaths of Romeo and Juliet, and to what extent is fate responsible for their deaths? Theatres today and how they have changed since Shakespeare's day and I'll be finishing with comparing the two videos of Romeo and Juliet also Film adaptation of the modern Romeo and Juliet film and I'll be studying in detail (Act5 scene 3). The Prologue of Romeo and Juliet reveals the entire story in a single page. The prologue raises the questions (1) To whom do the events occur? And (2) What are the details of the story? The two families are very rich and powerful but Romeo, a Montague, and Juliet, a Capulet, are sworn enemies because of an ancient feud between their families. In beautiful Verona, Italy " . . . where we lay our scene. From an ancient grudge break to new Mutiny." This quote symbolises Romeo and Juliet's love. These star-crossed lovers prove their love by respecting each other in spite of their family's conflicting. Instead they love each other which in the end, was much worse than hating each other therefore fulfilling the uprising to which the Prologue refers. "Where civil blood make civil hands unclean," means that all the towns people and family members had a part in Romeo and Juliet's death. If the families were not so hateful towards each other, they would have lived a great and successful life together. "From forth the fatal loins of these two foes A pair of star-crossed lovers take their life;" The son of one enemy and the daughter of another take their life in a desperate attempt to show their never ending love for each other. ...read more.

On the other hand, Romeo and Juliet may have been favourable to marry and would have partaken in the ceremony one way or another no matter what the Friar's decision. If the Friar had not suggested his dramatic plan to the desperate Juliet, she may never have seen Romeo again and the couple would have stayed alive, despite in depression! Perhaps, however, that if Juliet had not had the chance to see Romeo again she would have committed suicide anyway. The couple may have been marked regardless of the Friar's decision to involve Juliet in his elaborate plot. Tybalt, the cousin of Juliet and hotheaded enemy of the Montague household, changed the course of events by agreeing to fight Romeo in town. If Tybalt had not deliberately started to make fun of Mercutio, the two would not have got into their duel and Romeo may have been safe from the threat of banishment. Romeo, the youngest son of Lord and Lady Montague and Juliet's husband, was in fact a major influence on the events leading up to the deaths of him and his young wife. Romeo acts too hastily throughout the play: he shouldn't have asked Juliet to marry him so suddenly, and he should have thought more carefully before rushing back to Verona after hearing of Juliet's death. Romeo also acted violently and without thinking when he killed Tybalt and, later, Paris. Perhaps if he had thought about what he was doing a little more before acting, the deaths of him and his fair Juliet would have been averted. Juliet, the beloved daughter of Lord and Lady Capulet and Romeo's lover, was also a major influence on the events leading up to the deaths of her and her husband. Juliet shouldn't have deceived and disobeyed her parents, and, like Romeo, she was too hasty in rushing into marriage. She was already engaged to marry Paris at the time of the ball, and until then, had been very happy with her parent's choice. ...read more.

Even so, she still can't see him, and even walks right past him while busy talking to the stars. This change doesn't effect our understanding at all, but is more exiting visually than the traditional scene. Also, by incorporating the swimming pool into the scene Baz Luhrmann has managed to add more freedom of movement to the characters and the added tension of the security guard coming out to look, the whole time Romeo has to hold his breath underwater as not to be seen. Juliet then returns to her calling nurse in her room by the stairs so she is permanently in the view of the camera, not splitting up the action/speech by entering a lift. It also avoids repetition. The Prologue was used in the play as a way for people to know what was going to happen if they should miss sections and so they could get the general gist of it. In the modern film adaptation the Prologue plays a huge part at the beginning of the film. It is played 3 times over. By the news reporter on the television and again on signs around Verona City. And again as text flashing on the screen. In the film the prologue is used to wet peoples appetite and get them interested and exited- loud powerful music and action during the prologue do this effectively. The director has also done the clever thing of making each scene contrast from the previous and the next. This juxtaposition not only makes the film more exiting to watch but can highlight differences in peoples feelings and actions, and how it can effect others. A point where this can be seen is after Romeo and Juliet have been married, a scene of much joy and hope is contrasted sharply with the following more violent scene. In this scene Mercutio is killed by Tybalt, this is a scene where there is a raging sea and no sign of hope, and it is apparent that their marriage isn't going to work out at all. ...read more.