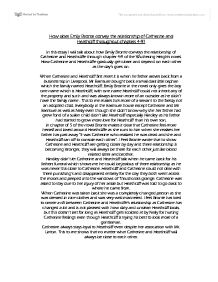 Wuthering Heights. How does Emily Bronte convey the relationship of Catherine and Heathcliff throughout chapters 4-9?

How does Emily Bronte convey the relationship of Catherine and Heathcliff throughout chapters 4-9?

When Catherine and Heathcliff first meet it is when he father arrives back from a business trip in Liverpool. Mr Earnsure bought back a small dark little orphan which the family named Heathcliff. Emily Bronte in the novel only gives the boy one name which is Heathcliff, with one name Heathcliff could not inherit any of the property and such and was always known more of an outsider as he didn’t have the family name . This to me makes him more of a servant to the family not an adopted child. Everybody in the Earnsure house except Catherine and Mr Earnsure as well as Nelly even though she didn’t know why she her father had grew fond of a sullen child didn’t like Heathcliff especially Hindley as his father had started to grow more love for Heathcliff than his own son,

In chapter of 5 of the novel Bronte makes it clear that Catherine feel more herself and loved around Heathcliffe as she runs to him when she realises her father has past away “It was Catherine who realized he was dead and she and Heathcliff ran off to console each other”. I Feel Bronte wrote that to show Catherine and Heathcliff are getting closer by day and there relationship is becoming stronger, they will always be there for each other just like blood related sister and brother.

Hindley didn’t let Catherine and Heathcliff talk when he came back for his fathers funeral which shows me he could be jealous of there relationship as he was never this close to Catherine. Heathcliff and Catherine could not deal with there punishing’s and disappeared entirely for the day they both went across the moors and peeped into the windows of Thrushcross grange. Catherine was asked to stay due to her injury of her ankle but Heathcliff was told to go back to where he came from.

When Catherine was taken back she was a completely changed person as she was dressed in nice clothes and was very well mannered. I feel Bronte has tried to create a rift between Catherine and Heathciffe’s relationship as Catherine has changed a lot and is not pleased with how dirty and unclean Heathcliff looks, but this doesn’t last for long as Heathcliff gets scolded at by Nelly for hurting Catherine feelings even though Heathcliff is trying his best to look more of a gentleman.

Catherine always stays loyal to Heathcliff even despite her association with Mr. Linton. This to me shows that no matter what Catherine and Heathcliff will always be close to each other.

It shows that Catherine cares a lot for Heathcliff as she stayed out started looking for him in a panic. He was gone, Catherine stayed outside looking for him despite a violent thunderstorm. She stayed up in her wet clothes, and caught cold. This to me shows that Catherine no matter what happens she will always love Heathcliff the most because after her father passed away she has been attached to him a lot.

To conclude this essay I believe that Emily Bronte hasn’t changed Heathcliff and Catherine’s relationship a lot because they have always had a strong bond of love between them which nobody can separate.