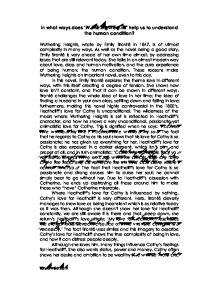 Wuthering Heights - how it portrays the human condition

In what ways does 'Wuthering Heights' help us to understand the human condition? Wuthering Heights, wrote by Emily Bront� in 1847, is of utmost complexity in many ways. As well as the novel being a good story, Emily Bront� is very ahead of her own time almost, by addressing issues that are still relevant today. She talks in an almost modern way about love, class and human motivation, and the pure experience of being human; the human condition. These reasons make Wuthering Heights an important novel, even to this day. In this novel, Emily Bront� explores the theme love in different ways, with this itself creating a degree of tension. She shows how love isn't constant, and that it can be shown in different ways. Bront� challenges the whole idea of love in her time; the idea of finding a husband in your own class, settling down and falling in love; furthermore, making this novel highly controversial in the 1800's. Heathcliff's love for Cathy is unconditional. The wilderness of the moors where Wuthering Heights is set is reflected in Heathcliff's character, and how he shows a very unconditional, passionate yet animalistic love for Cathy. This is signified when he says: 'I cannot live without my life! ...read more.

The fact he has been placed in a lower class differentiates how Cathy shows her love towards him, forcing Heathcliff to try and better himself. This even results in Heathcliff attempting to drive Cathy mad with jealousy, by marrying Isabella. In his pursuit of Cathy's love, he manages to destroy all around him, affecting his own self. This means that Bront� could even be supporting the upholding of these conventional values. Initially the answer would seem to be no, as the reader sympathizes with Heathcliff; the gypsy oppressed by a rigid class system and constantly referred to as 'imp' or 'fiend'. But as Heathcliff pursues his revenge and persecution of the innocent, the danger posed by him to the community becomes apparent. Like other novels of the 1830s and 40s, Wuthering Heights may really suggest the necessity of preserving traditional ways; to prevent danger to the world that is perhaps even unnecessary, because fighting for this cause still won't get you what you want. This helps us understand even if we know that ultimately we cannot obtain what we want, we will still fight for it the best we can; part of the human condition. Cathy is so induced by this system of class, she thinks of class as part of the reason to marry someone or a reason to love. ...read more.

However, after her death, Hindley is subdued into a world of alcoholism and fury, to the point where he endangers the lives of his loved ones. This is shown when Hindley 'carried him [his own son] upstairs and lifted him over the banister' and actually drops him. Hindley is also affected by jealousy. Because his adoptive brother, Heathcliff, was favoured by his father, he had to endure being shadowed by Heathcliff all of his childhood, until his father died. Considering this, Hindley grew up to hate Heathcliff, and eventually destroyed Heathcliff, using him as a servant, placing him in a lower class. Therefore, Hindley indirectly ruined Heathcliff's chances of obtaining Cathy's hand in marriage. In conclusion, I feel that the novel by Emily Bront� helps us to understand the human condition in a way that no other novel does. Her unique way of showing love within the novel meant that she didn't just show the initial attraction of love, but how it can corrupt one's other feelings and thoughts. Bront�'s use of language within the novel displays the emotions and motivations of the characters successfully, and gives a great sense of the reality of the human condition to the novel. As a result of this, Bront� will remain one of the greatest writers to of lived, and her books will, and currently, remain as relevant and as important as they did in the 19th century. ?? ?? ?? ?? Laura Pearson ...read more.