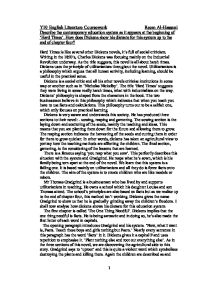 Y10 English Literature Coursework Reem Al-Hassani Describe the contemporary education system as it appears at the beginning of 'Hard Times'. How does Dickens show his distaste for this system up to the end of chapter four? Hard Times is like several other Dickens novels, it's full of social criticism. Writing in the 1850's, Charles Dickens was focusing mainly on the Industrial Revolution underway. As the title suggests, this novel is all about harsh times. Dickens uses the principle of utilitarianism throughout the novel. Utilitarianism is a philosophy which argues that all human activity, including learning, should be useful in the practical sense. Dickens is a social critic and all his other novels criticise institutions in some way or another such as in 'Nicholas Nickelby'. The title 'Hard Times' suggests they were living in some really harsh times, what with industrialism on the way. Dickens' philosophy is shaped from the characters in the book. The two businessmen believe in this philosophy which indicates that when you teach you have to use facts and calculations. This philosophy turns out to be a selfish one, which only focuses on practical learning. Dickens is very aware and understands this society. He has produced three sections to their novel: - sowing, reaping and garnering. The sowing section is the laying down and scattering of the seeds, mainly the teaching and ideas. This means that you are planting them down for the future and allowing them to grow. The reaping section indicates the harvesting of the seeds and cutting them in order for them to grow quicker. In other words, dickens has taken an agricultural view to portray how the teaching methods are affecting the children. The final section, garnering, is the considering of the lessons that are learned. There is a famous saying 'you reap what you sow'. This perfectly describes this situation with the system and Gradgrind. ...read more.

Gradgrind continues to single sissy Jupe out and treat her as an object. He still calls her by her number, not name, 'Girl number twenty possessed of no facts!' by using the word 'possessed', Dickens makes the reader immediately think of an object being possessed of something evil. Dickens portrays Gradgrind as a monster when he shows him pointing his finger which gives a sense of aggression. Gradgrind is sexist in this part of the novel because he looks for 'some boy's definition of a horse'. Finally he chooses a boy called Bitzer and once again Dickens uses the names of the characters to convey their personality. The name Bitzer, when looked at closely would mean 'bits of' knowledge and probably very little of anything else. Before we hear Bitzer's definition, we get a very detailed description from Dickens. He says the sun was darting in through the 'bare window', implying no curtains and a 'whitewashed room' which indicates how functional and yet useless it is because it gets dirty very easily. A very effective sentence from the paragraph is, 'whereas the girl was so dark-haired and dark-eyed, she seemed to receive a deeper and more lustrous colour from the sun when it shone upon her, the boy was so light-eyed and light-haired that the self-same rays appeared to draw out of him what little colour he ever possessed.' Dickens portrays the sun here as a life giver because when it shines on Sissy, its enlightening and enriching whereas when it shines on the boy, it seems deadly, as if it's sucking the life out of him. This shows contrast between them. Once again, without showing it, Dickens is likening the children to plants because when the sun shines on Sissy, it's the perfect amount for photosynthesis for her to grow. When it shines on Bitzer, it's too much, so there's a drought. When Bitzer gives his definition of a horse, Dickens makes him sound like a machine because he uses short, quick sentences such as 'Quadruped. ...read more.

It tells us the sort of man who Gradgrind prefers the company of. Mrs Gradgrind is portrayed as frail, a shambles and always taking medicine without any effect. When Bounderby talks to her, he has to stand up because he wants to feel overpowering. He's a control-freak who chooses weak women to be his prey. Women are second class to him and he wants to look down on them to subdue them. When Gradgrind comes home, he questions Thomas and Louisa in front of Mrs Gradgrind and Mr Bounderby. Mrs Gradgrind tries to discipline the children when she finds out what they've done. This is because she's panicking, she doesn't want to be blamed and so she tries to be angry at them. Dickens shows his distaste by showing what Gradgrind thinks of his wife. He says he is 'raising her to her high matrimonial position' as if he's doing her a favour by marrying her. He's always ignoring her and her opinion doesn't matter as she 'once more died away and nobody minded her'. She's depressed and downtrodden. Dickens is sympathetic with her and women. Mrs Gradgrind probably isn't even physically ill, she's just spiritually crushed by her marriage - Mr Gradgrind only married her to have children with. The children are unhappy because they're living in a cold hard place. The little girl, Jane, has gone to sleep crying. Mr Bounderby goes to Louisa and Thomas and tells them that it's all going to be alright. He asks her for a kiss and she 'ungraciously raised her cheek towards him, with her face turned away.' There's no warmth and Mr Bounderby is too thick-skinned to realise that Louisa hates his guts. She stands there rubbing her cheek for five minutes afterwards until it burns. Thomas tells her to stop but she says 'you may cut the piece out with your penknife if you like, Tom. I wouldn't cry!' she's saying either rub it, or cut it out, its going to be clean anyway and this tells us just how severe her depression is becoming. ?? ?? ?? ?? 1 ...read more.