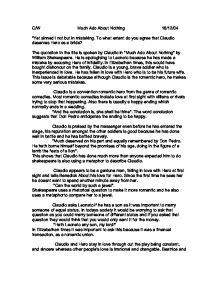 Yet sinned i not but in mistaking. To what extent do you agree that Claudio deserves Hero as a bride? The quotation in the title is spoken by Claudio in &quot;Much Ado About Nothing&quot; by William Shakespeare

C/W Much Ado About Nothing 16/12/04 "Yet sinned i not but in mistaking. To what extent do you agree that Claudio deserves Hero as a bride? The quotation in the title is spoken by Claudio in "Much Ado About Nothing" by William Shakespeare. He is apologising to Leonato because he has made a mistake by accusing Hero of infidelity. in Elizabethan times, this would have bought dishonour on the family. Claudio is a young, brave soldier who is inexperienced in love. He has fallen in love with Hero who is to be his future wife. This issue is debatable because although Claudio is the romantic hero, he makes some very serious mistakes. Claudio is a convention romantic hero from the genre of romantic comedies. Most romantic comedies include love at first sight with villians or rivals trying to stop that happening. Also there is usaully a happy ending which normally ends in a wedding. "And the conclusion is, she shall be thine". The word conclusion suggests that Don Pedro anticipates the ending to be happy. Claudio is praised by the messenger even before he has entered the stage, his reputation amongst the other soldiers is good because he has done well in battle and he has battled bravely. ...read more.

He gets jealous very quickly and he is so inexperienced in love that he believes what anyone tells him about Hero. Now Claudio knows that Hero is dead, he attends a mourning ritual. He shows genuine remorse of her death. "Done to death by slanderous tongues". This quote is said by Claudio when he is at the service. This quote shows us that, now she has died, it was all because of people using their tongues and saying things that were not actually true. Claudio in act 5, scene 1 believes he is not in the wrong and thinks that he is right as he saw Hero being wooed with his own eyes. Claudio continually defends his honour even after he has found out that she has died. "My villainy". This rhetorical question shows that Claudio believes that he is not in the wrong and his judgements have been right. Claudio also gains the audience sympathy because he is set up by the friar. He is also deceived. "And let my counsei sway you in the case". The audience and most of the characters know Hero isn't dead this is called dramatic irony. However, the evidence is debateable. some critics argue that his actions are unjustified and that he acts cruelly andtherefore does not deserve Hero as a bride. ...read more.

This shows that Claudio strongly believes that he is right about Hero sleeping with other men so he is very nasty to him even though Hero is dead. When Hero is declared innocent, Claudio pleads for mercy from Leonato. Leonato chooses his punishment. He must conduct a mourning ritual at her tomb and marry someone who Leonato will chose. "Give her the right you should have given her cousin and so dies in my revenge". Leonato lets Claudio get away with killing Hero and sets up a marriage. This is a typical of a romantic comedy. Even when Leonato can choose who Claudio marries, he still tells Claudio how much money he will inherit if he does. This would suggest that money is more important to him than who he marries. "She alone is heir to both of us". Claudio will inherit Leonato and Antonio's fortune. Therefore, i conclude that Claudio does deserve Hero as a bride because even though he had made a very bad mistake by embarassing himself and Hero and the wedding scene, it was all Don Johns fault as Claudio believed him as he fort that he was a loyal friend. Also he has loved Hero since the first time he met her and this doesn't change so therefore I think that Claudio does deserve Hero as a bride. ?? ?? ?? ?? ...read more.