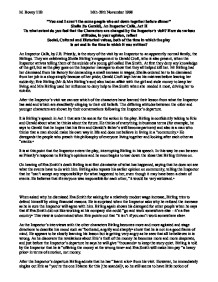 &quot;You and I aren't the same people who sat down together before dinner&quot; Sheila [to Gerald], An Inspector Calls, Act II

M. Bovey 11B 16th-28th November 1998 "You and I aren't the same people who sat down together before dinner" Sheila [to Gerald], An Inspector Calls, Act II To what extent do you feel that the Characters are changed by the Inspector's visit? How do various attitudes, in your opinion, reflect Social, Cultural and Historical values, both of the time in which the play is set and in the time in which it was written? An Inspector Calls, by J.B. Priestly, is the story of the visit by an Inspector to an apparently normal family, the Birlings. They are celebrating Sheila Birling's engagement to Gerald Croft, who is also present, when the Inspector arrives telling them of the suicide of a young girl called Eva Smith. At first they deny any knowledge of the girl, but as the play goes on the Inspector manages to show that they all helped kill her. Mr Birling had her dismissed from his factory for demanding a small increase in wages; Sheila ordered her to be dismissed from her job in a shop simply because of her pride; Gerald Croft kept her as his mistress before leaving her suddenly; Eric Birling (Mr & Mrs Birling's son) also had an affair with the girl and stole money to keep her living; and Mrs Birling used her influence to deny help to Eva Smith when she needed it most, driving her to suicide. After the Inspector's visit we can see which of the characters have learned their lesson from what the Inspector has said and which are steadfastly clinging to their old beliefs. The differing attitudes between the older and younger characters are shown by their conversations following the Inspector's departure. It is Birling's speech in Act 1 that sets the scene for the action in the play. Birling is confidently talking to Eric and Gerald about what he thinks about the future. ...read more.

When Eric hears the tale of events that began with his father's dismissal of her he is disgusted by what he did and begins to distance himself from his opinions. Interjections such as: Birling ...I said they[the striking workers] could go and work somewhere else. It's a free country, I told them. Eric It isn't if you can't go and work somewhere else. show Eric's opinion of his father's conduct. This means that Eric soon finds himself having a similar opinion as Sheila about their parents' ideas - although for different reasons. Sheila is distressed that her parents do not seem to have heeded the Inspector's warning, whilst Eric is angry that the actions of his parents have led to the death of the woman who was to have his child and is understandably upset at their "don't-care� attitude. This drawing together of ideas is ironic as in the first scene Eric and Sheila spend most of their time annoying each other. Eric's return at the beginning of Act 3 is greeted with fury by Birling, who bitterly tells him that "you're the one I blame for this� and is joined by Mrs Birling, who is "also ashamed� of him. This throws Eric into a wild rage in which he shouts at his mother for turning help away from Eva Smith when she needed it most. Birling dismisses Eric as a "hysterical young fool.� After the Inspector's final message Eric seems to gain clear understanding of the principle of the community (note that the Inspector commented that "we often seem to make the greatest impression on the young ones) and reminds his parents that "I'm ashamed of you as well - both of you�. He tries to assist Sheila in making the elder family members see the lesson that they have been taught, but to no avail. Eric finally severs his links with his father's ideas on community when he savagely criticises Birling's description of people like the Inspector as "cranks�, stating "I didn't ...read more.

Birling was not to know of the rise of the Labour Party in Britain or the Russian Revolution of 1917. In his closing speech the Inspector warns about what will happen if his message about men living together in a community is not heeded: Inspector ...We don't live alone. We are members of one body. We are members of one body. And I tell you that the time will soon come when, if men will not learn that lesson, then they will be taught it in fire and blood and anguish. Good night. In hindsight we can see that the "fire, blood and anguish� that the Inspector was warning about happened in the case of the First World War. This had started because the countries of Europe, instead of existing together, had formed themselves into two camps, with the countries within them allied together. Serbia was Russia's ally, who was also on the side of Britain and France, who had both promised to protect Belgium. Austria and Germany (and later Italy) were also allies. When Austria attacked Serbia, the Russians declared war on Austria and the Germans invaded Belgium, sending Britain and France into battle. The result was a hellish war in which millions died. Had the countries been able to live together then there would not have been a war. The fact that the play was written in the midst of the Second World War suggests that Priestly was saying that the lessons of what happened in the First World War had not been learned. In summary, An Inspector Calls details the differing attitudes of the Birling family to the events leading to Eva Smith's death and how they accept the responsibility for their actions. The older characters are too rigid to change but the younger ones are able to see their faults and accept what they have done is wrong. The play also reflects various cultural, social and historical, which reflect on the time both in which the play is set in and when it was written. ...read more.