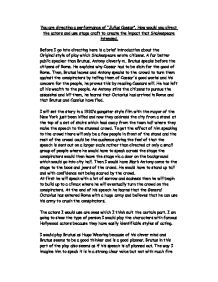 You are directing a performance of &quot;Julius Caesar&quot;. How would you direct the actors and use stage craft to create the impact that Shakespeare intended.

You are directing a performance of "Julius Caesar". How would you direct the actors and use stage craft to create the impact that Shakespeare intended. Before I go into directing here is a brief introduction about the Original style of play which Shakespeare wrote citizens. A far better public speaker than Brutus, Antony cleverly m. Brutus speaks before the citizens of Rome. He explains why Caesar had to be slain for the good of Rome. Then, Brutus leaves and Antony speaks to the crowd to turn them against the conspirators by telling them of Caesar's good works and his concern for the people, he proves this by reading Caesars will. He has left all his wealth to the people. As Antony stirs the citizens to pursue the assassins and kill them, he learns that Octavius has arrived in Rome and that Brutus and Cassius have fled. I will set the story in a 1930's gangster style film with the mayor of the New York just been killed and now they address the city from a stand at the top of a set of stairs which lead away from the town hall where they make the speech to the stunned crowd. To get the effect of him speaking to the crowd there will only be a few people in front of the stand and the rest of the crowd could be the audience giving the feel of that the speech is sent out on a larger scale rather than directed at only a small group of people where he would have to speak across the stage the conspirators would then leave the stage via a door on the background which would go into city hall. Then I would have Mark Antony come to the stage to the boos and jeers of the crowd. He would have to stand up tall and with confidence not being scared by the crowd. ...read more.

(The crowd will fall silent) ANTONY. Friends, Romans, countrymen, lend me your ears; I come to bury Caesar, not to praise him. The evil that men do lives after them; The good is oft interred with their bones: So let it be with Caesar. The noble Brutus Hath told you Caesar was ambitious: If it were so, it was a grievous fault; And grievously hath Caesar answer'd it. Here, under leave of Brutus and the rest,-- For Brutus is an honourable man; So are they all, all honorable men,-- Come I to speak in Caesar's funeral. He was my friend, faithful and just to me: But Brutus says he was ambitious; And Brutus is an honourable man. He hath brought many captives home to Rome, Whose ransoms did the general coffers fill: Did this in Caesar seem ambitious? When that the poor have cried, Caesar hath wept: Ambition should be made of sterner stuff: Yet Brutus says he was ambitious; And Brutus is an honourable man. You all did see that on the Lupercal I thrice presented him a kingly crown, Which he did thrice refuse: was this ambition? Yet Brutus says he was ambitious; And, sure, he is an honourable man. I speak not to disprove what Brutus spoke, But here I am to speak what I do know. You all did love him once,--not without cause: What cause withholds you, then, to mourn for him?-- O judgment, thou art fled to brutish beasts, And men have lost their reason!--Bear with me; My heart is in the coffin there with Caesar, And I must pause till it come back to me. FIRST CITIZEN. Methinks there is much reason in his sayings. SECOND CITIZEN. If thou consider rightly of the matter, Caesar has had great wrong. THIRD CITIZEN. Has he not, masters? I fear there will a worse come in his place. FOURTH CITIZEN. ...read more.

Antony will now become calm again and turns to the crowd.) CITIZENS. We'll mutiny. FIRST CITIZEN. We'll burn the house of Brutus. THIRD CITIZEN. Away, then! come, seek the conspirators. ANTONY. Yet hear me, countrymen; yet hear me speak. CITIZENS. Peace, ho! hear Antony; most noble Antony! ANTONY. Why, friends, you go to do you know not what. Wherein hath Caesar thus deserved your loves? Alas, you know not; I must tell you then: You have forgot the will I told you of. CITIZENS. Most true; the will!--let's stay, and hear the will. ANTONY. Here is the will, and under Caesar's seal. To every Roman citizen he gives, To every several man, seventy-five drachmas. SECOND CITIZEN. Most noble Caesar!--we'll revenge his death. THIRD CITIZEN. O, royal Caesar! ANTONY. Hear me with patience. CITIZENS. Peace, ho! ANTONY. Moreover, he hath left you all his walks, His private arbors, and new-planted orchards, On this side Tiber: he hath left them you, And to your heirs forever; common pleasures, To walk abroad, and recreate yourselves. Here was a Caesar! when comes such another? FIRST CITIZEN. Never, never.--Come, away, away! We'll burn his body in the holy place, And with the brands fire the traitors' houses. Take up the body. SECOND CITIZEN. Go, fetch fire. THIRD CITIZEN. Pluck down benches. FOURTH CITIZEN. Pluck down forms, windows, any thing. (The crowd of citizens departs from the scene climbing into there vehicles and going after the conspirators) ANTONY. Now let it work.--Mischief, thou art afoot, Take thou what course thou wilt!-- (Antony's servant returns to his side) How now, fellow? SERVANT. Sir, Octavius is already come to Rome. ANTONY. Where is he? SERVANT. He and Lepidus are at Caesar's house. ANTONY. And thither will I straight to visit him: He comes upon a wish. Fortune is merry, And in this mood will give us any thing. SERVANT. I heard 'em say Brutus and Cassius Are rid like madmen through the gates of Rome. ANTONY. Belike they had some notice of the people, How I had moved them. Bring me to Octavius. (Antony climbs into a car and drives away) ...read more.