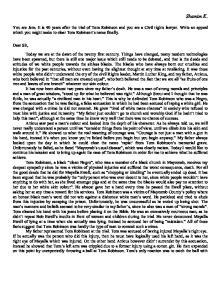 You are Jem. It is 40 years after the trial of Tom Robinson and you are a Civil rights lawyer. Write an appeal which you might make to clear Tom Robinson&amp;#146;s name finally.

Shamim K. You are Jem. It is 40 years after the trial of Tom Robinson and you are a Civil rights lawyer. Write an appeal which you might make to clear Tom Robinson's name finally. Dear Sir, Today we are at the dawn of the twenty first century. Things have changed, many modern technologies have been spawned, but there is still one major issue which still needs to be debated, and that is the deeds and attitudes of we white people towards the sinless blacks. The blacks who have always born our cruelties and injustice for the past centuries, without even having the slightest thought at any time at retaliating. It was these white people who didn't understand the cry of the civil Rights leader, Martin Luther King, and my father, Atticus, who both believed in "that all men are created equal", who both believed the fact that we are all "as fruits of one tree and leaves of one branch" whatever our skin colour. It has now been almost two years since my father's death. He was a man of strong morals and principles and a man of great wisdom, "stood up for what he believed was right." ...read more.

He was an excessively courteous man, as he didn't repeat Bob Ewell's insults in front of women and children during the trial. He never denounced Meyalla Ewell of lying at a time when she actually was lying. Instead he accused her of being "mistaken." All of these facts suggest that Tom Robinson was hardly the type of man to commit such a crime. My father represented Tom Robinson at the trial. Tom was accused of having injured Meyalla's right eye. If he actually was the person who did this injury, then he must have logically used his left hand, as it was the right eye of Mayalla which was injured. On the other hand Atticus however didn't surrender by this accusation, instead he showed that Tom's left arm was crippled due to a former injury using a cotton gin. He then expanded on this point by unexpectedly throwing a ball at Tom Robinson. Tom's only reaction was to catch the ball with his right arm. A left-handed person would logically have inflicted this injury. Tom's left arm was shriveled and totally useless. On the other side of the coin, my father showed to the whole court that Mr. ...read more.

We are all created from the same dust and have the same rights. " We know that all men are not created equal, in the sense some people have more opportunities than others because they are born with it, for example some people can make more money than others." Maycomb itselfis like a bird, in which one of it's wings can be regarded as a white man and the other as a black. As long as these two wings are not equivalent in strength, the bird will not be able to fly. Until the blacks reach the same degree and level as the whites, social progress for Maycomb will not be realized. Only when the wings are equivalent the bird will gain it's strength and will be able to fly. Likewise, only when the blacks reach the same level as the whites, remarkable achievements will dawn, since at that time the two powers will be united together to work for a particular aim. A disease that was devastating the Maycomb society at that time was pure racism. This is exactly what Tom Robinson was facing during the trial. Today I have this dream to clear the 'rapist' name from Mr. Tom Robinson's memorial grave stone which I hope that this dream will come to a reality through this appeal. ...read more.