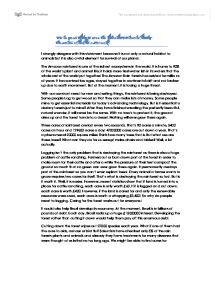 It is no good trying to save the rainforest if it means putting thousands of people out of work. To what extent do you agree/disagree with this statement?

‘It is no good trying to save the rainforest if it means putting thousands of people out of work’.

I strongly disagree with this statement because it is not only a natural habitat to animals but it is also a vital element for survival of our planet.

The Amazon rainforest is one of the richest ecosystems in the world. It is home to 90% of the world’s plant and animal life; it holds more freshwater fish in its waters that the whole rest of the world put together! The Amazon Rain forests has existed for millions of years. It has survived Ice ages, stayed together in continental drift and not broken up due to earth movement. But at the moment, it is facing a huge threat.

With our constant need for new and exiting things, the rainforest is being destroyed. Some people Log to get wood so that they can make lots of money. Some people mine to get essential materials for today’s advancing technology. But is it essential to destroy forests just to mine? After they have finished wrecking the perfectly beautiful, natural wonder, it will never be the same. With no tree’s to protect it, the ground dries up and the forest turns into a desert. Nothing will ever grow there again.

Three acres of rainforest are lost every two seconds. That’s 90 acres a minute, 5400 acres an hour and 129600 acres a day! 47000000 acres are cut down a year. That’s a phenomenal 20000 square miles! Think how many trees that is. But what use are these trees? What can they do for us except make chairs and tables? Well, a lot actually.

Logging isn’t the only problem that is destroying the rainforest as there is also a huge problem of cattle ranching. Farmers cut or burn down part of the forest in order to make room for their cattle and after a while the pressure of their feet compact the ground so much that no green can ever grow there again. It permanently destroys part of the rainforest so you can’t even replant trees! Every animal a farmer wants to graze requires two acres for itself. That’s what is destroying the rainforest so fast. But is it worth it. Well, it is easier. However, recent statistics show that if land is turned into a place for cattle ranching, each acre is only worth £60. If it is logged and cut down, each acre is worth £400. However, if the land is cared for and only the renewable resources were used, each acre is worth a whopping £2,400! So why do people resort to logging. Caring for the forest works out for everyone!

It could also help Brazil develop its economy. At the moment, Brazil is in billions of pounds of debt. Each day, Brazil racks up a huge £15000000 interest. Developing the forest rather than cutting it down would help them pay off this enormous debt.

Cutting down the forest wipes out 27000 species each year. What if one of them had the cure to aids, cancer or bird flu? Scientists have checked only 5% of the rain forests plants and animals and already they have treatments for many diseases that were thought of as lethal not so long ago. We might be able to find cures for incurable diseases such as aids and HIV. Can we really let this opportunity for immunity be cut down, burnt or destroyed?

It is a known fact that our world is heating up due to global warming. Now what relevance does this have to the Amazon? Well quite a lot actually. As you may know, plants respire in the opposite way that we do. We breathe in oxygen and breathe out C02. Plants breathe in this C02 and breath out oxygen. The Amazon helps with this a lot. However, with less and less trees every second, there aren’t going to be enough trees to take in our C02. This will mean more C02 into the greenhouse layer and this warming the planet more

As I just explained, trees breathe in C02 and breathe out oxygen. So where does the C02 go? Well, the tree keeps it. Trees are basically large stores of carbon, Imagine what happens when a logger burns down a mature, 150 year old tree in the forest. It releases 150 years worth of carbon into the atmosphere. This is very bad for the environment.

So how can we make a difference? Well, an easy thing to do is buy fewer things that have a demand for rainforest materials. Things like mahogany doors. If people don’t buy them then there won’t be a demand and people will stop logging mahogany. Something that may be considered harder is to vote for a government party that priorities the environment and rain forests. One last thing is to call off the massively growing debt for Brazil. This way, they won’t have to exploit the rain forests.

In conclusion, I think the Amazon rainforest should be saved as it is an important part of our lives and without it, we would be plunging into global warming into an even more alarming rate. The way to save the rainforest is to stop people wanting to destroy it and the way to do this is give people what they want from the forests without destroying them. With many people, this is money. Calling off the debt, in my opinion, is the best way to save the forests. Are we going to be remembered for saving humanity, or dooming it with cattle ranching, slash and ranch, illegal logging, deforestation and urbanization? We can still choose!