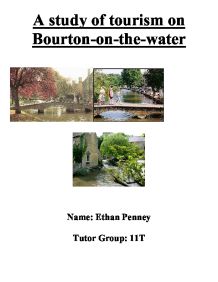 A study of tourism on Bourton-on-the-water

There is only one fish and chip shop in Charlbury, this is the market for a fish and chip shop isn't large enough to cope with more than one. This would be because there are no tourists to purchase this kind of food. In Bourton there are ten tourist related shops which sell all the kinds of things, tourist would be looking to take home, such as postcards and souvenirs. Things like these are bought for people back home and for them to look back upon to remember such a beautiful place like Bourton-on-the-water. They are tourist related because hardly any, if any at all villagers would purchase from that shops, simply because they live in the town. A camera shop would survive and is in a place like Bourton, because tourists purchase cameras and films so that they can take pictures of some of the picturesque views of the spectacular Cotswold's, however as there are no tourists in Charlbury such a shop is not necessary as it wouldn't be targeting the tourists. Clothes shops in Bourton can be related to tourism because, as weather in all countries differs, the majority of people may come from hot countries and may not have prepared for the shock of the British climate. Therefore such a shop would be critical to ensure that the tourists had the right clothes for the weather. A lot of tourists visiting Bourton is good because it keeps the economy of the place high, and creates many job vacancies in the shops. As stated by Taylor, "increased job opportunities are a positive impact of tourism" From looking at this statistical data, we can begin to see how my hypothesis will be correct or not. Another quotation taken from the great geographer Taylor states that "Overcrowding makes it difficult for locals to use and enjoy the facilities in the area" By this he means that is the tourist population of a place is high and people begin to feel crowded then locals will ...read more.

This will ensure that the results reflect the views of the populations of tourists and visitors in both towns. The surveys could be conducted at different times of the day to make sure the views of tourists are properly represented, and at different times of the day to ensure the views of all residents are reflected 2. I could've carried out traffic counts at different times and days and at a number of different places. This will ensure that the impact of cars on both locations is accurately assessed. There are electronic traffic sensors that could be installed to record the number of cars passing a certain point continuously. 3. An accurate tally of businesses could be gained by using local business directories. This would then enable an accurate assessment of the number of businesses in both locations that are targeted at tourists. This would then enable a survey to be carried out to find out the number of businesses such businesses employed. This information could be used to assess the impact of tourism on the economy of the area. 4. The environmental survey could be improved by measuring it at a variety of different times to ascertain if it deteriorates as a result of tourism. The environment could be compared with a greater variety of non-tourist and tourist towns to assess the precise impact of tourism on environmental quality. To conclude, after analyzing all of the data and drawing conclusion it would be fair to say that my hypothesis in this case have been proven to be right, however if I could gain more sufficient detailed data, then I'm not so sure that this would be the case, so I can finally say that from comparing Bourton-on-the-water to Charlbury by the amounts of data collected, the two conclusions drawn from the assessed information, proven to be correct by geographical theory and practice are; 1. Tourism has affected the goods and services available at Bourton-on-the-water. 2. Tourism has affected the environmental quality of Bourton-on-the-water. ...read more.

Strongest points are: The recognition of limitations and evaluating their impact on results, as well suggesting improvements. Describing and explaining the results in the analysis, with reference to specific aim/hyp as well as geographical theory. However, improvements: Use a wider variety of sources for geographical theory - it appears only 1 is used. Check some uses of geographical terminology and look for opportunities to include more. Increase linkages within and between data throughout the project.