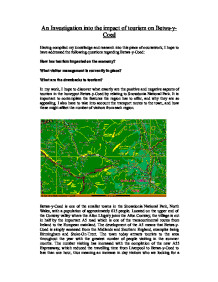 An Investigation into the impact of tourism on Betws-y-Coed.

An Investigation into the impact of tourism on Betws-y-Coed Having compiled my knowledge and research into this piece of coursework, I hope to have addressed the following questions regarding Betws-y-Coed: How has tourism impacted on the economy? What visitor management is currently in place? What are the drawbacks to tourism? In my work, I hope to discover what exactly are the positive and negative aspects of tourism in the honeypot Betws-y-Coed by relating to Snowdonia National Park. It is important to contemplate the features the region has to offer, and why they are so appealing. I also have to take into account the transport routes to the town, and how these might affect the number of visitors from each region. Betws-y-Coed is one of the smaller towns in the Snowdonia National Park, North Wales, with a population of approximately 615 people. Located on the upper end of the Conway valley where the Afon Llugwy joins the Afon Conway, the village is cut in half by the important A5 road which is one of the transcontinental routes from Ireland to the European mainland. The development of the A5 means that Betws-y-Coed is simply accessed from the Midlands and Southern England, examples being Birmingham and Stoke-On-Trent. ...read more.

Despite our relatively straight forward key, on many occasions we had to make a subjective choice when deciding which category a building fitted under. Frequently, we discovered a shop that sold both souvenirs and clothes for outdoor activities, and it was up to the individual to come to a conclusion. This presented problems, as it became a matter of opinion, and adaptation of the key. Another problem was that many of the buildings were presumably marked down as residential. There was a limitation to our method, as we had little idea as to whether these buildings were inhabited permanently or were rented out to tourists. Litter Survey To assess whether Betws-y-Coed is successful at managing litter that visitors inevitably bring, and to investigate whether such waste is a serious drawback to tourism. We can also discover if there is any correlation between the number of people recorded in the pedestrian survey and the severity of the litter. An individual was sent to a particular site in Betws-y-Coed, and marked out an approximate five metre radius. A scale of -3 to +3 was employed to measure the severity of the litter, with -3 being a serious problem and +3 being very clean. ...read more.

Also, we can distinguish how successful the village is at attracting visitors from various parts of Britain. We addressed random people in various sites around Betws-y-Coed and asked them several questions, recording answers in specific boxes. This survey was based on opinion, meaning evaluation is not really possible. The only dilemmas that arose were when pedestrians gave ambiguous answers, for perhaps what they had bought, and the individual was left to make a subjective choice. Data collected Purpose of Data How was it collected? Evaluation Initiative-questions to visitors concerning Betws-y-Coed To determine visitor opinion on the drawbacks of tourism in Betws-y-Coed, and also how successful the honeypot is at controlling tourism. I asked five visitors the following two questions, "What problems do you feel tourism brings to the area?" and, "Is Betws-y-Coed successful at managing excess visitors?" I listened to their opinions, and noted them down. Again, since my entire initiative was based on visitor opinion, then there were no significant problems with my method. The purpose was to record opinions, and link them with my key questions of the drawbacks of tourism, and the visitor management in place. However, I have to remember that visitors who have come several times to the honeypot will no doubt provide different answers than new comers, as they have experienced the village many times. ...read more.