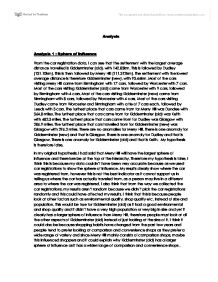 Analysis of sphere of influence in different shopping centres. Like Merry Hill and Kidderminster, Dudley has problems as well. The shops in Dudley are being closed down as many shoppers visit Merry Hill instead of Dudley resulting in a loss of businesses

We went to the shopping centre on a windy day which would be why there were very few people there, and even though on the particular day that we went, it was a market day, there were still very few people out shopping. Kidderminster (Old) had a lot of greenery compared to D7udley, which is why it received a 3.4 for its average score for greenery. However the planning for the settlement could be improved because during our visit we found that there were no benches, no other facilities that would make a visitors visit all the more worthwhile. Dudley like Kidderminster is an outdoors shopping centre and will therefore also be affected by the weather. Dudley has a population of 194,919 people which is a lot more than Kidderminster and Merry Hill. This proves my earlier point that the environmental quality is therefore affected by the population size of the settlement. Dudley received its lowest average score for greenery, with 1.6, this tells us that the town is not very eco friendly as it is not very forthcoming and doesn't want to help the environment and help reduce the global warming problem by planting more trees and plants. As Dudley has such a high population and yet very few of the shops in Dudley are still open because most have closed down during the credit crunch in the UK and as most people can't afford businesses, the unemployment rates for Dudley increase rapidly and as the unemployment rate increases so does the crime rates. All this makes Dudley a very hostile settlement, environmental wise. Implications of Findings: The quality of environment will have a massive impact on businesses and populations. Many shoppers look at the environmental quality of a shopping centre before they shop in that particular shopping centre, this is why many people prefer Merry Hill to Dudley. Because merry hill is environmentally, very friendly and because people get drawn to the cleanliness of the settlement, this is why businesses in merry ...read more.

However a disadvantage to this is that the opening of new shops will mean money is spent and because Kidderminster will need to advertise the anchor shops, the cost of advertisements will need to be added to the cost of building the anchor shops and supermarkets. I believe that an advantage of turning Dudley into a tourist settlement is that it will result in thousands of people visiting the settlement. As Dudley already has some tourist attractions such as the Dudley zoo and Dudley castle, I would say that not a lot of money needs to be spent on building new tourist attractions, but these attractions could just be cleaned and made more inviting for visitors. There also wouldn't be any need to familiarise people with the town and many people would visit the settlement from all over the UK, therefore money also wouldn't need to be spent on advertisements for these tourist attractions. However a disadvantage of this is that it will require money to have the attractions cleaned and made presentable. I think that the best solution for Merry Hill is investing money in building more convenience shops in Merry Hill, firstly because it will attract more customers to the shopping centre and secondly because it will also reduce the unemployment rates in Merry Hill and in neighbouring settlements. I think that the best solution for Kidderminster is having new supermarkets and anchor shops opened in the settlement because they will result in more customers, and increase in business and also reduce unemployment rates in the settlement, therefore reducing the crime rates in Kidderminster as well. I believe that the best solution for Dudley is to turn the settlement into a tourist town because firstly it will attract more visitors into the area, secondly the money spent on hiring the cleaning staff will mean that the unemployment rates will decrease as more people will be hired to maintain and look after the settlement, and thirdly as the unemployment rates decrease so will the crime rates. ?? ?? ?? ?? ...read more.