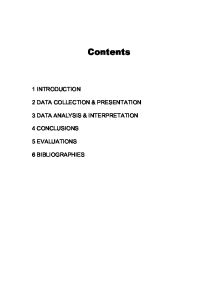 Contents 1 INTRODUCTION 2 DATA COLLECTION & PRESENTATION 3 DATA ANALYSIS & INTERPRETATION 4 CONCLUSIONS 5 EVALUATIONS 6 BIBLIOGRAPHIES 1 INTRODUCTION 1.1 INTRODUCTION Bangor is a town of approximately 80,000 people in County Down, Northern Ireland. Bangor is on the east coast of Northern Ireland on the southern side of Belfast Lough. It is a popular coastal town that has for many years been the tourist attraction of the area whether it is just for a day trip or a long weekend or even longer stays. It has rail and bus links to Belfast / Londonderry / Portadown / Enniskillen and even as far as Dublin. Bangor is also situated just 10 miles from George Best Belfast City Airport where aircraft come in from UK airports. About 40 miles further on is the Belfast International Airport where travellers can fly in from further a field. Bangor grew up around the abbey founded in 586 by Saint Comgall, where the Antiphonarium Benchorense (an ancient manuscript) was written. A copy of the manuscript can be seen today in the town's heritage centre. During the Dark Ages both the abbey and its university gained fame throughout the known world, but in the early 9th century a Viking attack saw some 900 of its monks slaughtered. The modern abbey now stands on the Newtownards Road just outside the town centre, right on the corner of Castle Park. The grounds include a small cemetery and cannon from the Amazon, a ship wrecked in nearby Ballyholme in 1780. The town (the third largest in Northern Ireland) is the site of a large marina (one of the biggest in Ireland). It is primarily residential and can be viewed as a dormitory suburb of the Greater Belfast area, from which it is linked by the A2 road and a railway line. Light industry also exists. A notable building in the town is Bangor Old Custom House. ...read more.

For example, if there are 2 rank values for rank 3, rank 3 and 4 will be added together and divided by 2, therefore giving a rank value of 3.5. The next rank after that would be 5. After putting each set of data into rank order, the difference in rank (D) between each value is squared (D2). The values of D2 are then summed giving ?d2 which forms the basis of the formula: RS=1-6x?d2 n3-n where n= the number of samples. Once a value is obtained the critical value, tables are used to see the strength of significance. If the value is greater than the critical value it's possible to accept that there is a significant relationship between the two values, in this case, between pedestrians and distance from the town centre. Ten points were chosen throughout Bangor, these are indicated on the next map. 3 DATA ANALYSIS & INTERPRETATION 3.1 Building Heights For building heights we were asked to test the following hypothesis: Hypothesis (Ho) <<There is no significant relationship between average building heights and distance from the town centre>> Alternative Hypothesis (Hi) <<There is a significant relationship between average building heights and distance from the town centre>> I decided to collect the data in a series of charts as follows on the next page: Picture showing the undulating building heights in High Street. Picture showing the amount of 3-storey houses In Dufferin Avenue. You can see that High Street has the greatest number of two storey buildings, while Dufferin Avenue has the most three storey buildings. I believe the reason for this is that the streets were all built at different times when different building styles were used. You can see this clearly in Dufferin Avenue as the Victorian terraces built near the start of the century all tended to be 3 storey buildings whereas 1970s style housing tended to be two storeys. ...read more.

The picture on the last page was taken outside the CBD, and you can clearly see the lack of pedestrians. This photo was taken in the heart of the CBD and you can see the large amount of pedestrians. Thus you can you the data recorded to prove that pedestrian count supported hypothesis Hi as it was a valid way of delimiting the CBD of Bangor. 4.4 Rateable Values The information for the rateable values was gathered from the rate office on the Hamilton Road. The data showed that the rates for shops were the highest among all land uses. More importantly, the data was able to show that the further away from the town centre, the cheaper the rates got. High Street (High Rates) Central Avenue (Low Rates) The assessment this data showed that the rateable value of property decreased with distance from the CBD of Bangor. This criteria supported hypothesis Hi that could be used to delimit the CBD of Bangor. 4.5 Parking Restrictions Central Avenue - Double Yellow To collect this data, streets were chosen and the data was logged on worksheets to investigate different types of paring restrictions in Bangor. The idea was that the more restricted the parking, the closer you would be to the CBD. The data here supported Hypothesis Ho. There was no valid way of showing the CBD of Bangor using these criteria. 5 EVALUATION 5 Evaluation When I went to Bangor it was a very beautiful day with lots of pedestrians. I think Bangor was an excellent area to study as it could easily be covered on foot in one school day and the layout of the route was well thought out. It was a simple town as well as it followed a scheme and it was not complicated by multiple CBD's etc. I also think that if I was to extend the project I would enlarge my area of study to encompass outer boundary areas of interest such as Bloomfield Shopping Centre. It would be interesting to discover if the pedestrian density would increase as you neared the shopping centre. ...read more.