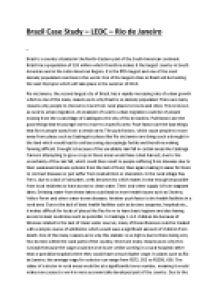 ﻿Brazil Case Study ? LEDC ? Rio de Janeiro Brazil is a country situated in the North?Eastern part of the South American continent. Brazil has a population of 193 million which therefore makes it the largest country in South American and in the Latin American Region. It is the fifth largest and one of the most densely populated countries in the world. One of the largest cities in Brazil will be hosting the next Olympics which will take place in the summer of 2016. Rio de Janeiro, the second largest city of Brazil, has a rapidly increasing rate of urban growth which is one of the many reasons as to why Brazil is so densely populated. There are many reasons why people to choose to move from rural places to towns and cities. This is known as rural to urban migration. An example of rural to urban migration could be of people moving from the rural village of Caatinga to the city of Rio de Janeiro. Pull factors are the good things that encourage one to move to a specific area. Push factors are the bad things that force people away from a certain area. ...read more.

This is a push factor as it would mean crops have too much water, causing them to be ruined and making food scarce, diseases such as Cholera could be spread a lot easier at times of flooding as water spreads a lot quicker and taking with it, the diseases. There are many pull factors which cause people to move into cities like Sau Paulo and Rio de Janeiro, some of which include better wages, more job opportunities, better education and many more. Workers are able to get a better income in more developed places like Rio de Janeiro. Due to the better income, workers are able to provide better living spaces and quality of life for themselves and their family. This would reduce problems such as a lack of housing and food shortages. When workers are paid, they have money, what the choose to do with this money is their choice, most would spend it on the other local business? such as shops, restaurants etc., this would mean that the local business? would benefit from their heightened income meaning that they could expand and become bigger and pay their employees. ...read more.

However in recent years a UPP scheme has been introduced in order to reduce crime levels. The Pacifying Police Unit patrol for 24 hours each day to ensure that their local area develops a friendly and calm environment for citizens. The scheme has reduced crime levels hugely thus making the area much safer. A new IT charity has also been introduced to help low income families move out the poverty ?cycle?. This allows individuals to gain new skills, embrace newer professional jobs; becoming wealthier thus becoming healthier due to being able to afford healthcare. This has improved social aspects of lives for individuals. More houses have also been built in the rural areas of Brazil (Pau Ferro). The self-help scheme has allowed families to live in a safer environment by decreasing the chances of fire and disease spreading. A new town has also been created (Barra) to encourage people to move away from urban areas of which are becoming overly densely populated. In terms of environmental improvements, a new scheme has been introduced where big factories (H & M, Pepsi) are made to pay a fire dependant on the levels of pollution. This discourages people from polluting, thus decreasing pollution levels, meaning that workers and locals are less prone to developing diseases and illnesses such as Asthma, Pneumonia, Bronchitis etc., and therefore improving health. ...read more.