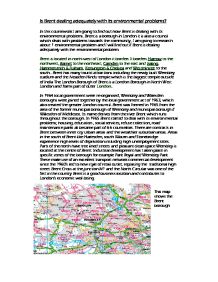 Is Brent dealing adequately with its environmental problems? In this coursework I am going to find out how Brent is dealing with its environmental problems. Brent is a borough in London it is also a council which deals with problems towards the community, I am going to research about 1 environmental problem and I will find out if Brent is dealing adequately with the environmental problem. Brent is located in north-west of London it borders It borders Harrow to the northwest, Barnet to the northeast, Camden to the east and Ealing, Hammersmith & Fulham, Kensington & Chelsea and Westminster to the south.. Brent has many tourist attractions including the newly built Wembley stadium and the Neasden Hindu temple which is the biggest temple outside of India The London Borough of Brent is a London Borough in North West London and forms part of outer London.. In 1964 local government were re-organised, Wembley and Willesden boroughs were joined together by the local government act of 1963, which also created the greater London council. Brent was formed in 1965 from the area of the former municipal borough of Wembley and municipal borough if Willesden of Middlesex. Its name derives from the river Brent which runs throughout the borough. In 1965 Brent started to deal with its environmental problems; housing, education , social services, refuse collection, road maintenance parks all became part of 66 counsellors. There are contrasts in Brent between inner city urban areas and the wealthier suburban areas. ...read more.

The term sustainable development is used within the UDP. This provides us with a direct link between the UDP and local agenda 21. Brent's UDP was adopted on February 15th 1996. It was legal document and its policies and proposals are intended to last for 10 years. Brent council is responsible for ensuring the plan is updated. The UDP for Brent has been produced within the context of national and regional planning policies as well for London. The council will discourage traffic from using routes other then the main road network. The council will develop a cycle route network which will contribute to a strategic cycle route network for London as a whole. In order to provide safe and convenient routes to cyclists, the council has identified a network of projected cycle routes within the borough. The council will ensure the implementation of such a network during the lifetime of the plan. Where cycle routes cross main roads safe crossing facilities will be provided. In response to growing concerns about the environment, the United Nations conference on environment and development in Rio De Janeiro was held in 1992. This landmark meeting, nicknames 'the earth summit' resulted in over 150 nations agreeing to an international plan of action to protect the environment and maintain a level of sustainable development into the 21st century. Sustainable development is about our ability to meet our present needs whilst making sure future generations will also be able to meet theirs. This is the key understanding the overall aims of Agenda 21. ...read more.

The weaknesses I found in Brent's traffic problems are that: * Majority of people don't see any improvements in traffic problems * People think that Wembley has the worst traffic problems * Most people I asked in my questionnaire think Brent has not done enough to encourage environmentally friendly transport like biking. I was limited to choose one environmental problem which was traffic I chose this because I think that Brent is dealing most adequately with this problem. In this piece of coursework I have learnt that a lot of people think that there are no improvements in Brent's traffic but really my research showed that a lot of people are using public transport, more people are walking and taking bikes to school/work and more people are car sharing. In my coursework, I enjoyed giving out the questionnaire because I had a variety of responses of which I did not expect. My survey was only done in one place (Wembley high road) if I had done my survey in a different place my results may have been different but the time I did it between insured me I got accurate results for the place I did my survey. I also found out it's not only Brent's responsibility it is also people's moral responsibility to take care of Brent. As well as people having a moral responsibility they also have a religious responsibility to take care of the environment around them, therefore there should be no environmental problems but some people refuse to have a moral or religious duty that is why there are still environmental problems taking place. ...read more.