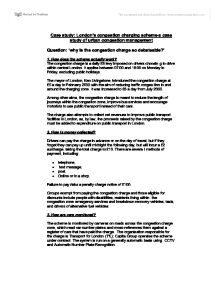 The boundaries of the congestion charge zone link points in central London such as Euston Road in the north, Commercial Street in the east, Vauxhall and Chelsea Embankment in the south and Harrow Road and Earls Court in the west. 5. The success of the scheme. * The congestion charge was welcomed by environmentalists as a way of reducing carbon emissions and encouraging people to use public transport, and town planners across the UK have begun looking into the scheme as a way of cutting congestion. * Vehicles with low carbon emissions receive a discount or an exemption from the charge. * The congestion charge scheme received a further boost at the beginning of 2008 when researchers from King's College, London and the London School of Hygiene and Tropical Medicine suggested there could be unexpected health benefits from the reduction of exposure to nitrogen dioxide. According to the researchers: "The results showed that there was little change in pollutant levels in London as a whole. ...read more.

* Many firms reported a fall in profits, and felt that the congestion charge was to blame. 7. What is the future of the scheme? 15 October 2009 The Mayor of London, Boris Johnson, has announced plans to increase the London Congestion Charge, as well as scrap the western extension of the zone. The proposed changes, which are still subject to consultation, would come into effect by December 2010. They are: * Removal of the western extension of the congestion-charging zone. * Introduction of an automated payment account system, provisionally called CC auto pay. * Increase of the daily charge to �9 for CC auto pay customers. * Removal of the �1 fleet discount. So that fleet operators will pay the same per vehicle as customers using CC auto pay. Boris Johnson commented: "The proposed increase in the charge will ensure that the system remains effective in controlling traffic levels in central London, and the revenue will also help us fund the vital improvements to London's transport network that all Londoners want to see." Sources use: http://en.wikipedia.org/wiki/London_congestion_charge http://news.bbc.co.uk/1/hi/talking_point/2729161.stm http://www.guardian.co.uk/society/2003/mar/17/transportintheuk.greaterlondonauthority http://www.politics.co.uk/briefings-guides/issue-briefs/transport/congestion-charge-$366631.htm http://www.roadtransport.com/Articles/2009/10/15/134793/london-mayor-unveils-congestion-charge-plans.html ?? ?? ?? ?? ...read more.

Overall a good and informative case study. However it does not answer the question posed at the start. If it had answered the question it would have strengthened the answer considerably.