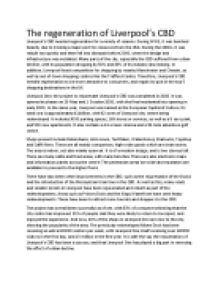 Transfer-Encoding: chunked ﻿The regeneration of Liverpool?s CBD Liverpool?s CBD needed regeneration for a variety of reasons. During WW2, it was bombed heavily, due to it being a major port for resources from the USA. During the 1960s, it was rebuilt too quickly and then fell into disrepair before 2000, when the design and infrastructure was outdated. Many parts of the city, especially the CBD suffered from urban decline, with its population dropping by 50% and 45% of its industry also leaving. In addition, Liverpool faced competition for shopping by nearby Manchester and Chester, as well as out-of-town shopping centres like the Trafford Centre. ...read more.

Its total cost is approximately £1billion, with 42 acres of Liverpool city centre being redeveloped. It includes 3000 parking spaces, 169 stores or services, as well as a 5 acre park, and 500 new apartments. It also contains a 14-screen cinema and a 36-hole adventure golf centre. Shops present include Debenhams, John Lewis, Ted Baker, Waterstones, Starbucks, Topshop and Caffé Nero. These are all mainly comparison, high-order goods which are chain stores. The area is indoor, yet also mainly open-air. It is of a modern design, and is two storeys tall. There are many cafés and food areas, with many benches. ...read more.

These have been to attract more tourists and shoppers to the CBD. The project has overall been successful as of yet, with 83% of consumers thinking that the city centre has improved. 91% of people said they were likely to return to Liverpool, and enjoyed the experience. And now, 40% of the shops in Liverpool One are new to the city, showing the popularity of the area. The previously redeveloped Albert Dock has been receiving an extra 100000 visitors per week, with Liverpool One itself receiving over 120000 visitors in the first day, and 13 million in the first year. It is safe the say the rejuvenation of Liverpool?s CBD has been a success, and that Liverpool One has played a big part in reversing the effect of urban decline. ...read more.