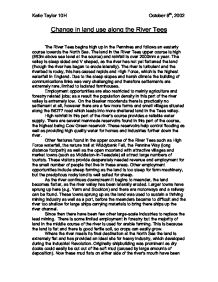 Change in land use along the River Tees.

Change in land use along the River Tees The River Tees begins high up in the Pennines and follows an easterly course towards the North Sea. The land in the River Tees upper course is high (893m above sea level at the source) and rainfall is over 2000mm a year. The valley is steep sided and V shaped, as the river has not yet flattened the land (though the river has began to erode laterally). The river is turbulent and the riverbed is rocky, this has caused rapids and High Force, which is the highest waterfall in England. Due to the steep slopes and harsh climate the building of communications links was very challenging and therefore settlements are extremely rare, limited to isolated farmhouses. Employment opportunities are also restricted to mainly agriculture and forestry related jobs; as a result the population density in this part of the river valley is extremely low. ...read more.

As the river continues downstream it begins to meander, the land becomes flatter, as the river valley has been laterally eroded. Larger towns have sprung up here (e.g. Yarm and Stockton) and there are motorways and a railway can be found. These towns sprung up as the land was used to sustain a thriving mining industry as well as a port, before the meanders became to difficult and the river too shallow for large ships carrying materials to bring there ships up the river channel. Since then there have been few other large-scale industries to replace the lead mining. There is some limited employment in forestry but the majority of land in the middle course of the river is used for arable farming. This is because the land is flat and there is good fertile soil, so crops can easily grow. Where the river meets its final destination at the North Sea the land is extremely flat and has provided an ideal site for heavy industry, which developed during the Industrial Revolution. ...read more.

These changes have affected the extent of settlement as well as the land use along the river. In the upper course the land is steep and rocky, settlements are sparse and few. The land has few uses other than for sheep faming as it is of a poor quality. When the river reaches the middle course the land has been slightly flattened by vertical erosion and larger settlements have resulted. The land here is predominately used for farming as well though in the past it has been used for mining. As the river reaches its final section it is much more urbanized and industrial and the population is denser. The land here is completely flattened (the river has created a flood plain through lateral erosion) and the land is used heavily for industry. As one can see changes in industry and economy have affected what the land is being used for (e.g. ship building has been replaced by oil refining) and new industries have increased population in certain areas and will do for many years to come. Katie Taylor 10H October 9th, 2002 ...read more.