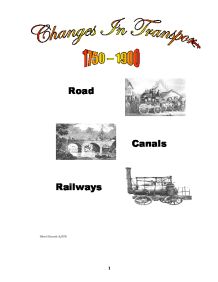 Road Canals Railways Word Count: 2,575 Contents Page Page 1 - Title Page Page 2 - Contents Page Page 3 - Introduction Page 4-5 - Road Page 6-7 - Canal Page 8-9 - Railway Page 10 - Conclusion Page 11 - Evaluation Page 12 - Bibliography Introduction This term the class 9M have been studying the subject of transport between 1750 and 1900. Now we have to do a project on transport during that period, in particular looking at roads, canals and railways. In this project I will be finding out four main things: * What transport was like before 1750 ? * Why did it need improving ? * How did each type of transport improve ? * How did this help the Industrial Revolution ? Hopefully this project will help you learn more about transport in the past and I hope you enjoy it. Below is a timeline diagram of the transportation between 1750 and 1900 just as a guide ! Road(1700) The need for better roads The increase in population, improvements in farming and growth of industry at the time increased road traffic and wore down roads making them soft. Farmers and industrialists needed good roads to move their heavy produce. Some roads at the time were so bad that travellers sometimes paid farmers to ride through their fields rather than get stuck in holes the horse could not go through. Turnpike Because of many complaints about the state of the roads, parliament devised a new system for financing roads. ...read more.

At Barton, it had to cross Irwell Valley. Brindley built the canal over the valley on an aqueduct. People found it amazing, the idea of a canal in the air, and thought it was beautiful. The Duke was delighted with the canal. He borrowed lots of money to have it built, but it was worth while. Using the canal, he could sell coal in Manchester for half the previous amount for 50kilos and still be making a profit. His coal sales increased as well as his income. The impact of Canals Canals made it cheaper and easier to transport heavy, bulky or fragile goods. Canal barges were slow but smooth and comfortable and many preferred this to being jolted about in a coach. Some towns greatly benefited from canals. Many manufacturers from the Midlands moved to Birmingham because of its good canal network. The town of Stourport grew up around the junction of Brindley's canal and the River Severn. However when the invention of railways came, the use of canals gradually declined. Some canals closed down as a result of the development of railways. Canals lowered their prices and charged less for bulk loads than the railways did, to try to compete with them. Despite their efforts, canal profits fell, and the companies could not afford to maintain and modernise their system. Many canals were bought over by railway companies, who then neglected them to get them out of the way. ...read more.

The transport improvements changed people's perspectives of time. The travel changes were a key improvement in the industrial revolution. It also brought a lot of employment and provided paid employment to some of the poorest workers. Income meant people could afford to support themselves and their family, they became healthier because of being able to support themselves; this meant the death rate decreased and the birth rate rose which caused an increase in population. More population meant more workers and consumers, which equaled more money and employment; the cycle carried on from there, improving the living standards. Evaluation In preparing to write this article I made trips to the library to find suitable source material and also spent considerable time on the internet trying to find suitable articles on transport history. I think the books and material found have provided me with sufficient information to gain an overview of this important period in transport history. I have enjoyed learning about this period as the information discovered helps me understand just how basic things must have been before good transport systems. I would certainly have a very different life today if transport hadn't changed. I know that from this period in our history England became a world power and one improvement to this project might have been to know how transport developed across Europe at the same time. Did England race ahead of other countries? Overall I think I did everything the sheet has asked for. I included some illustrations and pictures. I think I could improve in the future getting it done earlier, more illustrations and more detail. ...read more.