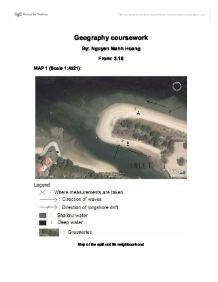 Geography coursework By: Nguyen Manh Hoang From: 3.18 MAP 1 (Scale 1:4521): Map of the spit and its neighbourhood My following report centers on the spit near Changi village. From Map 1, we can see that this is a wide spit extended from the original beach in the East- South East. It consists of A and B and has been interfered by humans as there are lots of man-grown greeneries. Hence, I aim to address the current factors affecting this spit such as waves, winds and human interference with reference to the data collected... and also the likely changes on this spit in the future with respect to these factors. Specifically, I hypothesize that the spit will be partially extended more in the future at A, while B will experience a very slow change in gradient. These will lead to the formation of a longer inlet. In addition, people will probably build a bigger port behind the spit. In my report, I will use methodology from my on-site records at the spit regarding the gradients, waves' directions and frequencies on both sides, which make my report precise, as well as information from textbook and the Internet to advocate my hypothesis convincingly. ...read more.

Hence, human interference is the reason which accounts for the steep gradient of B as people might have lifted up the middle of the spit to prevent flooding in the event of storms because this part of Changi beach is a nice and famous tourist attraction. This is why B is steep although it is undergoing deposition. Picture 1: Destructive wave at B Picture 2: Constructive wave at B At B, due to longshore drift, materials will move to the East-South East. But there is a sea wall there blocking material's movement (Picture 3). So at the sea wall's base, it will be higher as materials accumulate. As materials become higher, it will act like a sea wall which hinders longshore drift and causes its adjacent part to rise. Finally, B will get higher wider and flatter if nature takes its course. However, if we look at Map 1, we can see that the waves approach B at an almost-right angle, so longshore drift at B will dawdle, which means that the above-mentioned process will take a very long time (about thousands of years). Picture 3: A sight of B From map 1, we can see that A has a very large area of shallow water. ...read more.

Instead, as part of the spit is being extended tremendously due to fast longshore drift, more greeneries will be grown on the spit as their roots will bind the materials together, which stabilize the new and frail extended part for immediate effect. However, they can also add stress to the extended weak spit and make it sag... So this has to be planned properly. Most importantly, people will be likely to build a bigger port behind the spit. Because it is extended, it will create a larger area of calm water behind itself which means that small and average-size motorboats can come and anchor here for shelter and supply. Although most of the data collected is quite reliable as they are all collected from dependable sources such as textbook, Google Earth and especially on-site measurements, there is still one weakness regarding data collection. Because the experimental data through the visit to Changi beach is collected in just 2 hours from 2 to 4pm, at the other time, the data may be completely different due to the changing activities of natural factors (tides, winds,...) and man-made factor (movements of the ships) (refers to Map 5). Map 3: Thus, there should be a modification to my hypothesis as the spit will be likely to change according to the above-mentioned manner if there is no drastic change in the concerned factors between day and night. ...read more.