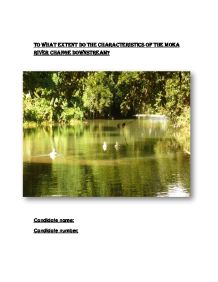 Characteristics of a river

To what extent do the characteristics of the Moka River change downstream? Candidate name: Candidate number: This coursework is on the study of the Moka River (Mauritius), a tributary of Grand River North West. It is for the IGCSE exams of November 2009. The aim of the coursework is to find out whether or not the Characteristics of the Moka River change downstream. Mauritius is located in the Indian Ocean. It is a small volcanic island, consisting of young rivers, which is conical in shape. Due to this most rivers flow in a radial pattern and obtain their source from the central plateau, the Moka River is one of them. Since all rivers follow a certain pattern (refer to the Bradshaw model), part of the coursework will be dedicated to finding out how well the River Moka follows the pattern. In order to do this nine different sites were surveyed, measuring a total length of 13 kilometres (km) out of the river's total 18km. The Moka River was the main choice for the coursework as it was providentially located near to our school. Several hypotheses will be used in order to try and decipher whether or not the Moka River's characteristics change downstream, and how well it follows Bradshaw's model also they will be used to examine if the Moka River follows a concave or convex long profile. ...read more.

t Hypothesis 2: velocity increases downstream as gradient decreases Site no. Velocity m/s Gradient 1 0.00 2 � 2 0.005 10 � 3 0.023 9 � 4 0.065 5 � 5 0.064 5 � 6 0.29 10 � 7 0.54 4 � 8 0.33 3 � 9 0.48 5 � Velocity is the speed of the river. It is calculated by using the following formula velocity=distance over time. It can differentiate depending on how much friction there is on the river bed, or even the shape of the river. However, the main factor being studied will be how velocity and gradient coincide. This hypothesis is being used to test whether or not it is true that velocity and gradient increase downstream. Site 1 has nil velocity and contains the lowest gradient of 2 �. However although there is a massive increase in gradient in site two, its velocity is still very low a mere 0.005 m/s. Site three, in comparison to the previous site, has quite a large increase in velocity. Both site 4 and site 5 has almost the exact same velocity (0.065m/s-0.064m/s) and identical gradient 5 �. Site six increases drastically where velocity is concerned and doubles in value for gradient, compared to that of the previous two sites. The seventh site has the highest velocity (0.54m/s) ...read more.

However some anomalies did occur, these were due to, as previously mentioned, human error (Clinometers), River bed being blocked by obstacles and obstacles obstructing the velocity. Having said this it can be concluded that the characteristics of the Moka River do change to a great extent as it flows downstream. Strengths Weaknesses Suggestions to improve Collection of data All data was able to be accessed in one day Only nine out of fifteen sites accessible Extend time period for collecting data Width and Depth It was simple to collect the data Rocks and boulders covering river bed made it impossible to find true reading of river bed None Finding the Temperature of air and water Information could be collected accurately None None Calculating velocity of a river Straight forward way of collecting data Float got trapped regularly between obstacles, also not the best instrument to use Find a better float Obtaining Gradient of a river Instrument east to use Frequent inaccurate readings due to human error and inexperience when using instrument. Get more used to the instrument and practice with it more Finding bed load of river Quick and easy to carry out River was sometimes too deep and dirty to dive and get readings of pebbles or any other materials None Finding the wetted perimeter Instrument used sunk quickly and took shape of the river bed easily Instrument used was heavy so difficult to manoeuvre Use a shinier chain so as it is easy to locate when in murky water ?? ?? ?? ?? ...read more.