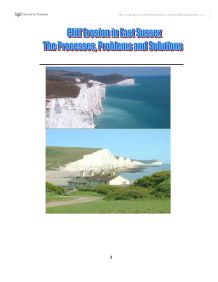 Cliff erosion in East Sussex - the processes, problems and solutions.

Index Introduction page 3 Summary of Coastal Erosion and Weathering page 4 Rottingdean page 5 Peacehaven page 7 Newhaven West page 9 Newhaven East page 11 Cliff Retreat rates page 13 Problems of Cliff Retreat page17 Solutions for Coastal Erosion page 19 Cost Benefit Analysis page 23 Questionnaire page 24 Questionnaire Results page 25 Questionnaire Analysis page 26 My solutions for the sites page 27 Lewes District Council's plans page 28 Reference page page 31 Introduction We went to Rottingdean, Peacehaven and Newhaven to look some examples of cliffs. All these places are located in Sussex, to the east of Brighton on the south coast. These maps show the location of these places:- The aims of this project are to find out how and why the cliffs are being eroded and weathered. Then to discuss what can be done and the best method to prevent or slow down these actions, which are causing coastal retreat. On the fieldwork afternoon we visited the cliffs and sketched the cliff profiles in rough, we also took photos so that we could look at them later. We labelled the profiles to show what was happening to the cliffs. We then noted down the coastal protection schemes already in action, eg sea wall, nothing, groynes etc. To collect the questionnaire data I first made a suitable questionnaire which I then handed out to people living in the local area to fill in. Once I had all the data I needed, I represented it so that I could see people's opinions. I noted down problems when I visited the cliffs, which I later looked up to confirm what I had seen. I researched on the internet to see if there were any other problems. At the same time I looked at the solutions to these problems, so that I could discuss the management methods which should be employed to prevent or slow down cliff retreat in East Sussex. ...read more.

Bare hands "The current solution is short to medium-term, and we are currently working with organisations such as the Environment Agency to develop a long-term plan." Ms Palser had been walking behind her partner, Malcolm Stanley, close to the cliff edge on New Year's Day, when it suddenly collapsed, covering her in debris. Mr Stanley tried to dig her out with his bare hands. A spokesman for Cumbria Fire and Rescue Service said it was believed heavy winds and rainfall had probably weakened the cliff face. Solutions The cliffs in Sussex are primarily chalk; however in Newhaven there is a stronger presence of sandstone. This means that the chalk cliffs, which are a soft sedimentary rock, are quickly eroded if by the processes of weathering and erosion. This means there is a lot of cliff retreat. So to slow this action down many methods can be employed; which solution we use depends upon many factors, one of them being money. There are two types of coastal protection: - Soft Engineering and Hard Engineering. Soft Engineering: - aims to dissipate wave energy by using natural coastal landforms. In this way, coastal defence works in consideration with natural processes of the local environment to help achieve an active equilibrium with the surroundings. The following strategies that can be used fall under this category:- 1. Managed Retreat: This is when not really any action is taken to protect an area but instead the rate of the retreat is watched and how far it has retreated. It is usually said that the area will be allowed to erode up until a certain point and then it will be defended. This is normally used in areas that are considered to have a low economic value, where the sea is allowed to erode and flood areas of coastline. It encourages the growth of beaches, which are a type of natural defence; and salt marshes, which are extremely important for the environment as it makes a sustainable ecosystem. ...read more.

Where such protection is proposed, but not yet in place, development which would increase the risks will be resisted until the works are provided. 4.55 However, where there is and will be no protection from flooding or coastal erosion, development will not be permitted which would put lives and property at risk within the foreseeable life of the development. Neither will development be permitted which would by itself at any time give rise to the need to carry out protection works. 7.20 The undeveloped coast in the Lewes District is worthy of protection. The cliff area between East Saltdean and Newhaven is amongst the only remaining stretches of undeveloped down land cliff top in Sussex, although some defence works have taken place and investigations into the feasibility of further works have taken place. Much of the marine and littoral areas and cliff top areas are rich in flora and fauna, specific to a particular area. The cliffs between Newhaven and East Saltdean are protected as Sites of Special Scientific Interest, primarily for the geology of the cliff and the foreshore." I have highlighted the text of these reports which I believe to be important and relevant to my project. In a summary, these reports say that there are certain areas which they will protect and areas which they have the responsibility to maintain as they are under their own "jurisdiction". There are also other parts to these reports that say that they are not likely to protect the area between Peacehaven and Newhaven; due to the cost benefit ratio. Furthermore, this is partly due to scientific research; because they want to keep some of the cliff as natural and unspoilt as there are not many like that in this area. But with any coastal protection it is under constant review and scrutiny by both councilors and residents. Reference Page Policies of Coastal Defence from Lewes Council * www.lewes.gov.uk/Files/plan_coaststrat.doc * www.lewes.gov.uk/policing/3203.asp * www.lewes.gov.uk/ coun/planning/lewes_ local_plan/contents_written.htm Maps from www.Getamap.com News Article on Cliff Collapse * From BBC news online ?? ?? ?? ?? 1 ...read more.