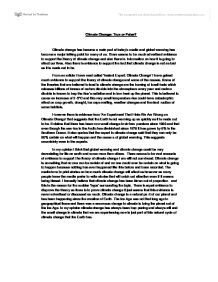 From an article I have read called ‘Instant Expert: Climate Change’ I have gained much evidence to support the theory of climate change and some of the causes. Some of the theories that are believed to lead to climate change are the burning of fossil fuels which releases billions of tonnes of carbon dioxide into the atmosphere every year and carbon dioxide is known to trap the Sun’s radiation and in turn heat up the planet. This is believed to cause an increase of 2-5°C and this very small temperature rise could have catastrophic effect on crop growth, drought, ice caps melting, weather changes and the destruction of some habitats.

However there is evidence from ‘An Experiment That Hints We Are Wrong on Climate Change’ that suggests that the Earth is not warming up as quickly as it is made out to be. It claims that there has been no overall change in air temperature since 1999 and that even though the sea-ice in the Arctic has diminished since 1978 it has grown by 8% in the Southern Ocean. It also quotes that the expert in climate change said that they can only be 90% certain on what will happen and the causes of global warming. This suggests uncertainty even in the experts.

In my opinion I think that global warming and climate change could be very devastating for life on earth and some more than others.  There seems to be vast amounts of evidence to support the theory of climate change I am still not convinced. Climate change is something that no one can be certain of and no one could ever be certain on what is going to happen because nothing has ever happened like this before and been recorded. The  media love to print stories on how much climate change will affect us however as many people know the media prefer to write stories that will catch out attention even if it means being biased. I honestly believe that climate change has been blown out of proportion and this is the reason for the sudden ‘hype’ surrounding the topic. There is equal evidence to disprove the theory as there is to prove climate change it just seems that this evidence is never advertised or discussed as much. Climate change is a natural part of our planet and has been happening since the creation of Earth. The Ice Age was not that long ago in geographical times and there was a enormous change in climate to bring the planet out of the Ice Age. In my opinion climate change has always been happening and always will and the small change in climate that we are experiencing now is just part of this natural cycle of climate change that the Earth has.