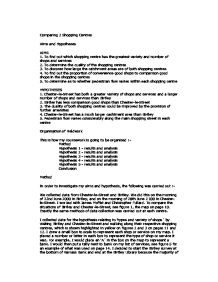 I think that my results take this pattern because the majority of shoppers are gravitated towards the larger shops. Point 9 is the busiest in Birtley, and that is directly next to a large Safeways for example. There are no shops next to point 1 in Birtley, and that�s why so few people pass by. I think it is difficult to say whether my original hypothesis has been proved true or false. This is because although Chester-le-Street�s pedestrian flow is varied considerably, Birtley�s is generally even throughout apart from a few exceptions, which are points 9, 13 and 1. I think my results could have been improved by staying at our points for longer. This is because people who were at work while we were doing our pedestrian flow count may of gone to different places. For example, if the survey were done at night, the points nearby to pubs might have been busier, or if it were done during lunchtime, bakers and takeaways may have been busier. Conclusion I think that my coursework has proved that Chester-le-Street has a greater variety and number of shops, and also a better quality shopping centre than Birtley. This is why I believe that Chester-le-Street has a larger catchment area than Birtley. Another thing I have found is that Birtley has less comparison goods shops in proportion to convenience goods shops compared to Chester-le-Street. This, in my opinion, is another reason why more people shop at Chester-le-Street than Birtley. I think that my project has been done fairly well, although I would of change some things if I could. One thing I would of changed is the amount of people interviewed for the questionnaires, because only about 140 people were interviewed in each town, and that is a tiny amount compared with the populations of both Birtley and Chester-le-Street, so I cannot be sure that our findings were representative of everybody�s views. I would also of preferred to have been given more time to do data collection, as I did have to work very efficiently to get everything done in time. ...read more.