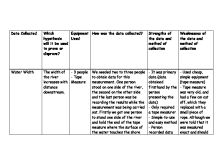 Data Collected Which hypothesis will it be used to prove or disprove? Equipment Used How was the data collected? Strengths of the data and method of collection Weaknesses of the data and method of collection Water Width The width of the river increases with distance downstream. - 3 people - Tape Measure We needed two to three people to obtain data for this measurement. One person stood on one side of the river, the second on the other side and the last person was be recording the results while the measurement was being carried out. Firstly we got one person to stand one side of the river and hold the end of the tape measure where the surface of the water touches the shore then the other person layed the tape measure over the surface of the water to the other side and took the measurement. Finally, the last person standing would record the results as soon as possible to prevent writing down wrong data. - It was primary data (data obtained firsthand by the person presenting the data) - Only required a tape measurer - Simple-to-use and easy method - Person recorded data straight away to avoid writing wrong data - Hardly any chance of human error because it was so straight forward. - We used the same tape at every site which meant it was a fair test. - The tools used did not cost a lot. - Used cheap, simple equipment (tape measure) ...read more.

- It was primary data (data obtained firsthand by the person presenting the data) - The method meant that the speed of the cork could've been affected by lots of variables (mostly environmental factors) which could have given us incorrect results. E.g. the wind speed could have either sped up or slowed down the cork, Pebbles, and sediments could have hit the cork and slowed it down. - The method did not prevent human errors like not stopping the stop watch at the exact right time. - The cork may have had more space to build up momentum at one site than another. - Due to the circumstances we only had budget equipment which is never going to produce the most accurate results. In different circumstances we could have used more expensive equipment which would have produced more accurate results. This would have also eliminated any chances of human error. Wetted Perimeter The wetted perimeter of the river increases with distance downstream. - Tape measure - 2 people The wetted perimeter was measured much like the rivers width. Once again, two people were needed to take the measurements, as well as a tape measure. One person would stand at each side of the river and record the results. Much like the rivers width, the first step was to get both people to stand at opposite ends of the river. The tape measure was then placed on the waters surface and measured from where water met the river bank, it was measured from the right of the river to the left of the river. ...read more.

Firstly we picked up 10 different pebbles. To make the results as fair as possible we used a ruler and picked them up every 10 cm without discrimination. After gathering all the pebbles that were needed we then measured their size with the tape measure using the guidelines provided on the sheet from the field centre. The sheet also provided images of typical pebbles that we would find. It then provided a rating system which helped us judge the roundness (sphericity) of the pebbles on a scale of 1-5. The sheet also had a table one it which provided space to record how the long the pebble was, how round it was, and lastly the sphericity. It had these 3 different sections, one for each site. - We were given the sheet from the field centre to guide us through it step by step so we could hardly go wrong on the method. - The ruler was in very good condition. - Pebbles were picked up without discrimination. - It was primary data (data obtained firsthand by the person presenting the data) - The roundness of the pebbles was judged by human observation making them probably very inaccu\rate as different people interpret things differently. - As I said before the tape measure had a piece of rope replacing the end which had come off. -There could have easily been some outliers in the sets of pebbles which may have come to be there due to a variable i.e. a child chucking pebbles in the stream. Picture 1 - Measuring Water Width Picture 2 - Measuring height of Right Bank Picture 3 - Ranging Rod: Picture 4 - Pebbles: ?? ?? ?? ?? ...read more.