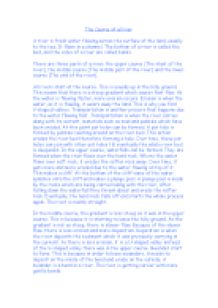 Describe the Course of a River

﻿The Course of a River A river is fresh water flowing across the surface of the land, usually to the sea. It flows in a channel. The bottom of a river is called the bed, and the sides of a river are called banks. There are three parts of a river, the upper course (The start of the river), the middle course (The middle part of the river) and the lower course (The end of the river). All rivers start at the source. This is usually up in the hilly ground. This means that there is a steep gradient which causes fast flow. As the water is flowing faster, more erosion occurs. Erosion is when the water, as it is flowing, it wears away the land. ...read more.

In the upper course, waterfalls can be formed. They are formed when the river flows over the hard rock. Where the water flows over soft rock, it erodes the softer rock away. Over time, it gets more and more eroded due to the water flowing on top of it. This makes a cliff. At the bottom of the cliff some of the water splashes onto the cliff and makes a plunge pool. A plunge pool is made by the rocks which are being carried along with the river, after falling down the waterfall they thrash about and erode the softer rock. Eventually, the hard rock falls off and starts the whole process again. The river is mainly straight. In the middle course, the gradient is less steep as it was in the upper course. ...read more.

A meander is a bend in a river. The river is getting curvier with more gentle bends. And finally, the lower course. The lower course is the complete opposite of the upper course. In the lower course it has a shallow gradient, which means there is slow flow. As it is so much slower, there is a lot less erosion and a lot more deposition. This causes huge meanders. In the lower course deltas can form. Also oxbow lakes can form. This is because when the river erodes on the outside and deposit on the inside the meander is constantly getting longer and thinner until water breaks across the neck of the meander. For a short time, water flows round the backwater and across the neck of the meander. Over time, the river keeps on depositing mud and earth until the backwater gets cut off leaving an oxbow lake and a straight river. ...read more.