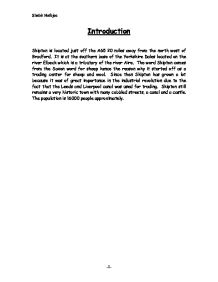 Discover how the traffic in Skipton varies from time to time and from place to place.

Introduction Skipton is located just off the A65 20 miles away from the north west of Bradford. It is at the southern base of the Yorkshire Dales located on the river Elbeck which is a tributary of the river Aire. The word Skipton comes from the Saxon word for sheep hence the reason why it started off as a trading center for sheep and wool. Since then Skipton has grown a lot because it was of great importance in the industrial revolution due to the fact that the Leeds and Liverpool canal was used for trading. Skipton still remains a very historic town with many cobbled streets, a canal and a castle. The population is 16000 people approximately. Chapter 1 (traffic survey) Aim: To discover how the traffic in Skipton varies from time to time and from place to place. Hypothesis 1: The by-pass will have a greater proportion of commercial traffic than the road through the center of Skipton. Method: We were doing the first traffic survey on the Skipton by-pass the A65. We started the survey at 09:45am and finished at 09:55am the survey lasted 10 minutes. We surveyed how many vehicles traveled to the north and south of Skipton. We recorded the results by sitting in a pair of two in the coach one of us collected the data of the vehicles traveling north whilst the other collected the data of the vehicles traveling south. At times we found it difficult because many vehicles were passing together in large amounts, for our data we wanted to see how many vehicles traveled north and south in an hour as we didn't have the time to collect data for an hour we multiplied the grand total of the vehicles traveling north and south by six. Results: Type of vehicles Vehicles moving north Total amount of vehicles moving north Vehicles moving south Total amount of vehicles moving south Car 40 40 35 35 Van 11 51 1 36 Lorries 6 57 10 46 ...read more.

The morning survey was done too late because by 10:30am the peak time traffic from 08:00-09:00am would have died down so if the survey was done in between 08:00-09:00am then the data for the survey would be better because there would be more vehicles and pedestrians on the road for peak time traffic all of them would be going to work and dropping there children off to school which makes the data more accurate. The afternoon survey was done too early because if the afternoon survey was done between 05:00-06:00pm there would be more vehicles and pedestrians coming back from work which would make the data more accurate. Hypothesis 3: roads that lead from Skipton to big cities will be busier than roads that lead from Skipton to small towns. Method: my group had to do our survey on Swadford street. We collected all the other data from the other pupils in the class who were allocated on different roads when we returned to school we got the data for the other roads from the other pupils in our class. Results: Road Traffic heading to Size Traffic The Baily Harrogate 2nd 4th Otley Road Leeds 1st 5th Keighley Road Keighley 3rd 2nd Swadford Street Colne 5th 1st Gargrave Road Kendle 4th 3rd Grassington Road Grassington 6th 6th Conclusion: My hypothesis was incorrect because there was more traffic going to smaller towns rather than going to big cities from Skipton. Swadford Street was the busiest, which does not lead to the biggest city (Leeds). Swadford Street, Gargrave road and Grassington Road all lead to small towns of which Grassington Road leads to the smallest town. Keighley is closer to Skipton than Leeds, which means that there will be more traffic coming to Skipton from Keighley than Leeds. Chapter 2 (shopping survey) Aim: To investigate Skiptons Central Business District/high street. Land use survey Hypothesis 1: The CBD will have a higher number of comparison shops. ...read more.

Results: (The results are shown on the next page) Conclusion: Looking at the map we can see that there is a pattern to the way in which land is used in Skipton. From the map we can see that the CBD (shops and offices etc) are found in the middle of Skipton. The industries are located in the south west of Skipton. The high cost houses are found on the outskirts of Skipton in the northwest. The medium cost houses are found in the north east of Skipton between the CBD and high cost housing. Low cost housing is found in the south and east of Skipton located next to the industries. High cost housing and industries are on the opposite side of town. There are many open spaces in Skipton, which is mainly on the outskirts. Chapter 4 (environmental quality survey) Aim: To investigate the environmental quality in Skipton. Hypothesis: Environmental quality will change from the center of town to the outskirts. Method: The groups were divided into smaller groups and were given different place to survey. My group was given Swadford Street. We looked around every 100 paces and measured the litter, traffic, buildings, plants, vandalism and number of bins. For each of these we gave them a rating of 1-5. 1 was classed as very poor and 5 was classed as very good. We recorded this data in a chart. We did our survey over 500 paces. Results: Paces from Swadford Street Litter Traffic Buildings Plants Vandalism Number of bins Total 0 3 4 3 4 5 3 22 100 5 4 3 4 5 3 24 200 4 3 4 3 5 3 22 300 4 3 4 1 5 1 18 400 3 2 3 1 5 1 15 500 3 2 3 1 5 1 15 Conclusion: My hypothesis was correct because as I went further away from the CBD the quality of the environment got worse. This survey was very easy and I did not have any difficulties collecting the data needed. ?? ?? ?? ?? Shabir Hafejee 1 - - ...read more.