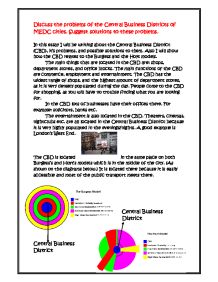 Discuss the problems of the Central Business Districts of MEDC cities. Suggest solutions to these problems.

I also think that if the government invested some money into improving the public transport drastically, then probably more and more people would choose to travel by it, recognising that it is faster than travelling by car and not so gross. Also another solution that I think would be successful is car sharing. For example I think that some people go to 2 places that are really close to each other, and yet still they take 2 cars, when they could take only one. That would help because there would eventually be less cars around, so there will be less traffic jams, so people will see that it is a good idea because they get to work on time, or maybe even they can sleep for another 10 minutes or so. Furthermore I think that pedestrianization of certain high streets is a good idea. For example Bond Street in London. That way it will encourage people to take the public transport as they won't be able to go on that road in their car anyway, and the pedestrians will have more space so they will move about more freely. Also allowing only "black taxis" and busses on to certain roads is a good suggestion, because it will also encourage people to take the public transport. In addition I think that introducing bus lanes is an excellent scheme, because the busses won't be stuck in the traffic jams, and they will take up less space because they will have to keep to their lane. ...read more.

Because of this, the competition some traders have had to leave and re-locate their business out-side the city center. Every business wants to set up there because all the people go there either for shopping, work or entertainment, also its easily accessible. One of the solutions I would attempt is to start building high-rise office blocks on a small area, but tall. That way we save space and money because we only pay for the space we take up on the ground. So now more offices can situate their offices in the city center. Another solution for this conflict is the building of out-of-town shopping centers in the suburbs or the rural-urban fringe. They need to take up lots of space so the land is cheap there so they have the money to build there stores there. People then travel there to and back. This process is called decentralization. Also most of them have free parking which is very attractive to customers, as they don't like paying for the parking space. In conclusion I think that the solution to the CBD's problems are hard to implement because the CBD is very crowded big, and it involved lots of co-operation from all of the people. Furthermore I don't think the CBD will ever get rid of it's problems because it will continue to get bigger and the amount of cars/shops/businesses etc. will always grow, and so will the competition, so it will be impossible to get ride of urban decline , pollution, traffic congestion etc. ...read more.