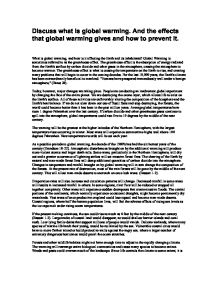 Discuss what is global warming. And the effects that global warming gives and how to prevent it. What is global warming, and how is it affecting the Earth and its inhabitants? Global Warming is sometimes referred to as the greenhouse effect. The greenhouse effect is the absorption of energy radiated from the Earth's surface by carbon dioxide and other gases in the atmosphere, causing the atmosphere to become warmer. The greenhouse effect is what is causing the temperature on the Earth to rise, and creating many problems that will begin to occur in the coming decades. For the last 10,000 years, the Earth's climate has been extraordinarily beneficial to mankind. "Humans have prospered tremendously well under a benign atmosphere," (Bates 28). Today, however, major changes are taking place. People are conducting an inadvertent global experiment by changing the face of the entire planet. We are destroying the ozone layer, which allows life to exist on the Earth's surface. All of these activities are unfavorably altering the composition of the biosphere and the Earth's heat balance. ...read more.

Other areas will experience sudden downpours that create massive floods. The central portions of the continents, which normally experience occasional droughts, might become permanently dry wastelands. Vast areas of once productive cropland could lose topsoil and become man-made deserts. Coastal regions, where half the human population lives, will feel the adverse effects of rising sea levels as the ice caps melt under rising ocean temperatures. If the present melting continues, the sea could rise as much as 6 feet by the middle of the next century (Bassett 1-2). Large tracks of coastal land would disappear, as would shallow barrier islands and coral reefs. Low-lying fertile deltas that support millions of people would vanish. Delicate wetlands, where many species of marine life hatch their young, would be reclaimed by the sea. Vulnerable coastal cities would have to move farther inland or build protective walls against the angry sea, where a larger number of extremely dangerous hurricanes would prowl the ocean stretches. Forests and other wildlife habitats might not have enough time to adjust to the rapidly changing climate. ...read more.

By cutting down the forest trees, we allow air pollution to set in. This, therefore, causes many problems in addition to many others. Now that there are no trees to help filter out pollution, we are allowing more damage to the atmosphere causing global warming. These certain gases that occur naturally in the atmosphere tend to trap the sun's heat which is called global warming. By trapping in the sun's heat, the Earth can be warmed up. Many of the Earth's natural disasters, such as volcanic activity, and other factors, have caused our planet's (Bates 23) atmosphere to become either colder or warmer. The global average temperature of the surface has increased by one degree Fahrenheit over the past century. This indicates that this warming trend is due to human influences. In conclusion, if there was no greenhouse effect then there would be no global warming. The greenhouse effect causes the global warming to increase as well as humans and other creatures influence. There are many ways to help prevent and protect both. If people try to help out, then it would be a longer process to keep the ozone layer healthy longer. But, nothing will be done until we as humans start helping out. ...read more.