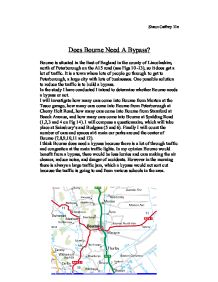 Does Bourne Need A Bypass?

Figure 4 shows the number of cars coming into Bourne at lunch time 13:00 - 13:30 and at the rush hour 17:30 - 18:00 at West Road. Generally there are more cars coming into Bourne during the peak periods where everyone is going to or coming from work, and it seems Bourne would benefit from a bypass if half the people going through Bourne don't live there. Figure 5 shows the 6 car parks roughly in the center of Bourne and their usage. It gives a rough idea of how much trough traffic there is. There are approximately 1450 cars coming into Bourne a day and 583 spaces in total over the 6 car parks, of which 433 are being used at a certain time. If I take away the number of used spaces from the total of cars Bourne has roughly 1017 through vehicles a day. There is an obvious pattern between figures 1,2,3 and 4, in that between 13:00 and 13:30 there are significantly fewer cars than between 17:30 and 18:00. ...read more.

As there is 583 car park spaces and I recoded 450 cars I don't think it is necessary for Bourne to have a bypass. EVALUATION I think my study was a success however I could have used better methodology than I did. This could have led to inaccurate results of the number of cars and the survey, and the conclusion I have made will have an extent of questionable viability. I could have taken more results for the number of cars, the survey and used all of the car parks in Bourne rather than a select group. If I had done this I would have had more evidence to back up my conclusion. If I were to do this again I would make several improvements: * Recoded the types of vehicle so I could work out the road capacity. * Taken a larger Traffic count. * Used more people in the survey. * Get some more people to help with the traffic count to see how many cars go in to and out of Bourne in an hour at peak and quiet times. ...read more.

Overall rating: 3 out of 5 stars.
The student has covered the main sections of the report- intro, method, results, analysis and conclusion. But all of these are at a fairly basic level. The main improvement would be to constantly refer back to the main aim and key question of 'does Bourne need a bypass'? in order to show how each set of data or information is useful and how it feeds into the conclusion to the study.