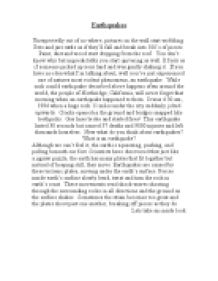 ﻿Earthquakes Unexpectedly out of no where, pictures on the wall start wobbling. Pots and jars rattle as if they?ll fall and break into 100?s of pieces. Paint, dust and wood start dropping from the roof. You don?t know why but unpredictably you start quivering as well. It feels as if someone picked up your land and was gently shaking it. If you have no idea what I?m talking about, well you?ve just experienced one of natures most violent phenomena, an earthquake. While such a mild earthquake described above happens often around the world, the people of Northridge, California, will never forget that morning when an earthquake happened to them. It was 4:30 am, 1994 when a huge rock 11 miles under the city suddenly jolted upwards. Cracks opened in the ground and bridges snapped like toothpicks. Gas lines broke and started fires! This earthquake lasted 30 seconds but caused 57 deaths and 9000 injuries and left thousands homeless. Now what do you think about earthquakes? What is an earthquake? Although we can?t feel it, the earth is squeezing, pushing, and pulling beneath our feet. Scientists have discovered that just like a jigsaw puzzle, the earth has many plates that fit together but instead of keeping still, they move. Earthquakes are caused by these tectonic plates, moving under the earth?s surface. Forces inside earth?s surface slowly bend, twist and turn the rock in earth?s crust. These movements send shock waves shooting through the surrounding rocks in all directions and the ground on the surface shakes. Sometimes the strain becomes too great and the plates shoot past one another, breaking off pieces as they do. Lets take an inside look Plate boundaries The places where plates meet are called plate boundaries. At some boundaries, plates move easily past one another, or collide and scrunch up to form mountains or even form volcanoes. Most earthquakes happen at the boundaries of an earthquake Divergent Boundary- At divergent boundaries tectonic plates move away from one another. ...read more.

Some landslides are slow moving while others move so rapidly that they can destroy cities and kill people in moments. Areas vulnerable to landslides are areas next to mountains with lots of loose soil and wet climate. Humans don?t get affected by earthquakes but rather they get directly affected by what is caused after them. Landslides, fires avalanches all affect how humans live economically. Earthquakes also may cause diseases, lack of basic necessities such as water and shelter, loss of life, higher insurance premiums, general property damage, and also road and bridge damages. Animal life is a bit more adaptable to these disasters but habitats can be destroyed costing the life of the animal or forcing them to migrate. Staying safe Until we have better ways to predict earthquakes, the smartest thing people can do is be prepared. Most injuries from earthquakes are from falling objects and crumbling buildings and not from the actual movement of the ground. Before an earthquake 1. Have a battery powered radio, flash light and first aid kids in your house and make sure everyone knows where they are kept. 2. Learn first aid beforehand. 3. Don?t keep heavy objects in high shelves. 4. Fasten heavy appliances to the floor, and anchor heavy furniture to the walls 5. Plan for your family where to meet after an earthquake if anybody is separated. 6. Conduct drills. 7. Find out your office has an emergency plan, know your responsibility at your works during an emergency. During an earthquake 1. Stay calm if you are indoors; stay out if you are out of buildings. Many injuries occur as people enter or leave the buildings. 2. If you are indoors, stand against a wall near the center of the building, or get under a sturdy table keep some cushion on your head. Stay away from windows and outside doors, if you are in a high rise building stand against a support column. 3. If you are in outdoor stay in an open place. ...read more.

No, unless the airplane is not that high up and something falls on it caused by the earthquake. No and yes. The earth trembles will not be felt, but any resulting disturbances caused by the earth's movement into the air will be felt by the plane, and there are also air pressure changes that will affect an airplane. * There are more than 50,000 earthquakes throughout the world every year * Animals usually can suspect an earthquake before it happens. Catfish are said to be restless before an earthquake, hens have been reported to lay fewer eggs and bees have been seen leaving their hives in a rush. *The first known instrument to detect earthquakes was noted back in 100 A.D. China. Volcanoes * Some people in Turkey hallow out volcanic chimneys and live in there. * Japanese monkey in winter are known to soak themselves in hot springs to get a chill from the weather. * It might be surprising that some plants actually live in sea volcanoes. Colorful tube worms change the chemicals in their body that enables them to make the gases that emit out of volcanoes into food. * According to legend, people used to sacrifice girls in order to please the fire god in stopping a volcano from erupting * One of the scientific theories in the cause of dinosaur extinction was that a supervolcano erupted killing many of the dinosaur species. Bibliography Books Earthquakes, by Sally M. Walker BC Science 7, by McGraw ? Hill Ryeson Volcanoes and Earthquakes by Dr. Eldridge M. Moores Volcanoes by Anna Claybourne Volcano by Lisa Magloff Volcanoes and Earthquakes by ken Rubin Earthquake! By Cynthia Pratt Nicolson Volcanoes and Earthquakes Susanna Van Rose Sites www.bookrags.com/research/volcanic-vent http://volcano.und.edu/ en.wikipedia.org/wiki/Earthquake yahoo.com = answers http://www.vtaide.com/png/George/earthquake.htm science.nationalgeographic.com Table of Contents Earthquakes????????????????. Plate boundaries??????????????. Faults??????????????????? Seismic Waves???????????????. Measuring Earthquakes???????????. Other paths of an earthquake ????????.. Staying Safe????????????????. What science can do????????????? Volcanoes?????????????????. What Volcanoes can cause??????????. The parts of a volcano???????????.... Active, dormant and extinct????????...... Volcano shapes??????????????.... Hot spots and geothermal energy??????..... Interesting Answers and Facts????????... ...read more.