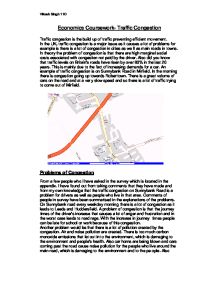 Problems of Solutions There are various reasons for the solutions for not working and these reasons come from the 4 people that I had surveyed and from the research on traffic congestion. People's comments have been summarised in the comments about the problems below. The problem with widening the roads is that pavements will be cut off, will only increase the level of traffic and number of vehicles. Also there will be increased pollution. It also has bad effect on the environment. Also there wouldn't be enough room to widen the road and costs a lot. But it work as there would be more room so cars can pass so volume would decrease. Buildings would have to be moved back and so the pavements would have to as well. The problem with introducing a road charge but is that it hasn't worked in the past and charges are already paid through excise licence so people will complain and also it is bad to use it in cities as there is a lot of traffic everyday. Also people would complain as it is costing them more money. It would not stop traffic in rush hour, as everyone has to go to work. Also there will only be a small reduction of cars. It would have an impact on wider economy as it will increase price of operating commercial vehicles and if prices goes high there could be cost push inflation. ...read more.

Another good solution is to introduce bus lanes as it will make them more attractive, restrict access of cars and give priority to buses, which are better alternatives than using a car, reduces congestion. But the disadvantage is it will only work in certain areas, short-term solution and a lot of time to prepare for. The last two solutions (above) are linked as a subsidy can be put on to bus lanes and public transport and therefore making the quality good and cheap to people as well. They both will reduce congestion and encourage people to use a different alternative. I would recommend these two solutions together as they reduce congestion, it is good quality, it is cheap and reduces travel times. I wouldn't recommend the others because they cost a lot of money, create more pollution and some have already been tried and failed. The solutions would work in Sunnybank Road as with the road being quite big, the road can be extended to give bus lanes. People in the local area will use the buses as it is cheap, quicker than a car and is good quality. The buses will then go on their routes. With more and more people being encouraged to use the bus then private car numbers will decrease and therefore congestion is decreased. With the profit made by the buses some can go to bus companies and the other profits will go to the government to pay back the subsidy so more expenditure will be on education. This means of transport will also reduce the amount of pollution given into the air everyday. Vikash Singh 11C ...read more.

Overall rating : 4 out of 5 stars
- Good structure to the report, describing situation and then considering all options before explaining a final choice.
- Some re-reading to make some explanations a little clearer would be beneficial.
- Some reference made to specific locations or statistics, but more could be added for more detail.