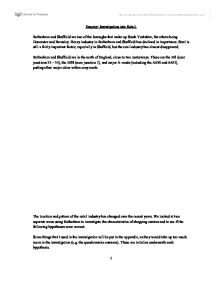 Enquiry: Investigation into Retail. Rotherham and Sheffield are two of the boroughs that make up South Yorkshire, the others being Doncaster and Barnsley. Heavy industry in Rotherham and Sheffield has declined in importance. Steel is still a fairly important factor; especially in Sheffield, but the coal industry has almost disappeared. Rotherham and Sheffield are in the north of England, close to two motorways. These are the M1 (near junctions 33 - 35), the M18 (near junction 1), and major A-roads (including the A630 and A631), putting other major cities within easy reach. The location and pattern of the retail industry has changed over the recent years. We looked at two separate areas using Rotherham to investigate the characteristics of shopping centres and to see if the following hypotheses were correct. Some things that I used in the investigation will be put in the appendix, as they would take up too much room in the investigation (e.g. the questionnaire answers). These are in italics underneath each hypothesis. Central Business District (CBD) - Rotherham Town Centre: 1. Services, major chain stores and shops selling low order goods dominate the CBD. Original map produced on trip 2. Most people were found where there are major stores and this corresponds to the highest land values. None 3. Shopping quality and street appearance deteriorate away from the town centre. Map of where shopping quality/street appearance locations were 4. Rotherham attracts people mainly from within the Rotherham Metropolitan Borough. Questionnaires (stapled together) Retail Park - Parkgate Retail World: 1. The nature of retail units on a retail park is different to those within a town centre. None 2. A retail park attracts people from a wider area than a town centre. Questionnaires (stapled together) Out of Town Shopping Centre - Meadowhall: 1. There are more chain stores and specialist shops selling high order goods than in the CBD. 'Meadowhall's Christmas Map' leaflet - map of Meadowhall 2. ...read more.

Tally Total number of stores % of all stores Car / 1 3.57 Childcare / 1 3.57 Clothing //// 5 17.85 DIY / 1 3.57 Drug // 2 7.14 Electrical //// 5 17.85 General // 2 7.14 Holiday Retailers / 1 3.57 Home and Furnishing //// 4 14.28 Pet Care / 1 3.57 Sport/Clothing // 2 7.14 Stationary / 1 3.57 Supermarket // 2 7.14 28 99.96 I have also converted this table into a doughnut graph: From this, we can say that clothing and electrical stores dominate Retail World, because combined own 35.7% of all the units (17.85% of all units each). Home and furnishings also ranks highly with 14.25% of the units. However, we can't compare this data to that of the CBD of Rotherham, because we didn't collect the shop types that it had. From the map, we can see that the shop types with higher densities tend to be located near to be each other. It is possible that the customer could benefit from this, as competition would almost certainly occur between then, making prices of goods cheaper to attract customers to a particular store. It would also help customers compare prices at different stores, to help find a 'bargain' product. This would make it a disadvantage to stores that haven't got competition, such as Staples or Daewoo. This is because customers are less likely to make a decision to purchase an item after only looking at the product in one shop. This would be particularly bad for stores which don't sell that many items, such as Daewoo, who obviously wouldn't sell as many cars, as they generally aren't needed to be bought as often as most other things which are sold at Parkgate Retail World. Conclusion: It is clear to see that there are differences between a Retail Park and a CBD, as I have explained. Whether it be because of the obvious points, such as: the differences in sizes; or the amount of stores within each area, or ...read more.

It also shows that in all three places, that travelling by bike or by walking is the least popular way of travelling. Rotherham Parkgate Meadowhall Total Total % Rotherham 16 4 2 22 52.38 Doncaster 0 1 2 3 7.14 Sheffield 0 2 6 8 19.05 Barnsley 0 3 2 5 11.90 Other 0 0 4 4 9.52 16 10 16 42 100 Graph 1: Graph 2: Graph 3: Conclusion: The areas where people travel from to get to Meadowhall are much more varied than that of Rotherham CBD and Parkgate (i.e. having a more even distribution of the number of people travelling from each place). This means that this hypothesis correct. An overall conclusion is on the next page... OVERALL CONCLUSION: The pattern of the retail industry is changing. Meadowhall and Parkgate Retail World appear to be thriving, in that higher numbers of people from the surrounding area visit them at regular intervals. Rotherham Town Centre, however, is a different story. Council Leader Mark Edgell, in a recent interview for Rotherham Advertiser (which is in the appendix), said: "The town centre is struggling because it is competing with Parkgate and Meadowhall. We can't do what they would do better than they do" (From 17th January 2003) This sums up what is happening, and shows us that the problem has been recognised by the RMBC. However, this decline may change. This is because, under the scheme Yorkshire Forwards, Renaissance Town Programme (a panel of experts) has been drafted to help show the way back to prosperity. These experts will be working with council leaders and community representatives to work out a recovery programme. (This is also mentioned in the article in the appendix). Views of people local to Rotherham town centre show a general dissatisfaction with what the CBD has to offer. This is shown on the next page. The task of regenerating business back into the centre is not just a Rotherham problem. ...read more.