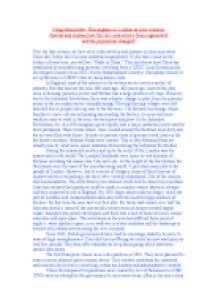 Essay on Regeneration in London and the Effects of the Olympics.

﻿Using Manchester, Birmingham or London as your example, discuss and explain how the city centres have been regenerated and the population changed? Over the last century, we have seen cities develop and prosper in numerous ways. Cities like Tokyo have become industrial superpowers. If you take a look on the bottom of most toys, you will see ?Made in China?. This just shows how China has established its manufacturing prowess, travelling from a LEDC (Less Economically Developed Country) to an NIC (Newly Industrialised Country). Companies choose to set up factories in LEDC?s due to cheap labour costs. In England, most of the jobs are in the tertiary sector (service sector) of industry. But this was not the case 400 years ago. 400 years ago, most of the jobs were in farming (primary sector) and Britain was a large producer of crops. However, due to the Industrial Revolution, there was a drastic change in jobs; from the primary sector to the secondary sector (manufacturing).Thriving farming villages were left deserted due to people moving near to the factories. ...read more.

By that time the area had very few jobs, the docks had closed, over half the land was derelict, many of the nineteenth-century terraced houses needed urgent repair, transport was poorly developed, and there was a lack of basic services, leisure amenities and open space. The waterways in the area had suffered from years of neglect: water quality is poor, river walls are in a bad condition and the landscape is scarred with rubbish strewn along the river channels. Since 1945, British governments have tried to encourage industry to move to areas of high unemployment. They did this by offering tax relief on new machinery or rent-free periods. They also offer subsidies to keep firms going which otherwise would close down. The first Enterprise Zones came into operation in 1981. They were planned for areas in acute physical and economic decay. They created conditions for industrial and commercial revival by removing certain tax burdens and administrative controls. Urban Development Corporations were created by Act of Parliament in 1980. ...read more.

After the Olympics, the Village will become part of the overall Stratford City regeneration scheme, including a new regional shopping centre with additional leisure, office and residential areas. It will be transformed into up to 3,000 new homes, with a mix of affordable housing, and accommodation for sale and rent. However, the Olympics has had some bad effects to. For instance, as soon as it was announced that London was holding the Olympic Games, house prices in the surrounding area were driven up. This means that some of the Londoners can?t afford to continue living in the same place. Also people who have lived in estate for years, have been evicted because it was going to be demolished in order for the Olympic Park to be built. Also, small businesses have been forced to move and sometimes, the businesses have to move out of the whole area because they can?t find a plot of land. Overall, the Olympic Games will provide jobs and therefore money to those who are most in need, redevelop an area of urban decay, and create housing for the people of east London. ...read more.