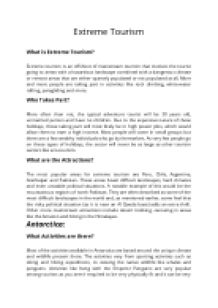 Transfer-Encoding: chunked ﻿Extreme Tourism What is Extreme Tourism? Extreme tourism is an offshoot of mainstream tourism that involves the tourist going to areas with a hazardous landscape combined with a dangerous climate or remote areas that are either sparsely populated or not populated at all. More and more people are taking part in activities like rock climbing, white-water rafting, paragliding and more. Who Takes Part? More often than not, the typical adventure tourist will be 30 years old, unmarried person and have no children. Due to the expensive nature of these holidays, those taking part will most likely be in high power jobs, which would allow them to earn a high income. Most people will come in small groups but there are a few wealthy individuals who go by themselves. ...read more.

Activities like living with the Emperor Penguins are very popular among tourists as you aren't required to be very physically fit and it can be very touching to be around them. Other activities like skiing across large distances or hiking up mountains like Mount Vincent are a lot more demanding physically and as such fewer people go on these expeditions, yet they are still quite popular due to the thrill achieved by taking part in these dangerous activities. How has the Number of Tourists going to Antarctica Changed? Tourism in the Antarctic regions started in the late 1950?s (approximately 1958), half a century after Amundsen and his team first arrived at the South Pole. At this time the numbers of people visiting the area were very low, a stark contrast with the numbers of tourists arriving today which is somewhere around 28,000 people per year. ...read more.

The sinking of the MS Explorer showed that access to the area needed to be restricted and lead to fuel spilling in the water, doing untold damage to the marine life. How have the Impacts been managed? All tour operators, of which there are more than 100, are members of the International Association of Antarctica Tour Operators (IAATO) and are urged to be environmentally friendly in their practices and are asked to convince tourists to be as well. In order to preserve more delicate areas, there are certain Sites of Special Scientific Interest (SSSI?s) which tourists are not allowed to visit so that the wildlife and inhabitants are protected. Anyone wishing to take part in activities on the island must have a permit and are banned from leaving any waste/litter behind and being closer than 5m to an animal. Any ships going to the area is limited in the amount of passengers it can have (500 max of which only 100 can disembark at once). ...read more.