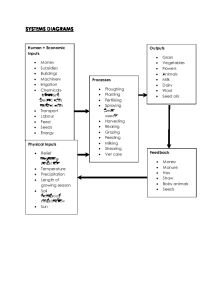 SYSTEMS DIAGRAMS TYPES OF FARMING Pastoral farming: keeping livestock- meat and dairy- specialises in rearing animals Arable farming: growing crops wheat, barley, etc. Mixed farming: both pastoral and arable mixed farmers often grow crops to feed their animals, so that money is saved on livestock feed Intensive farms: needs a high level of input to achieve a high yield per hectare technology, fertilisers, greenhouses, machines, more labour e.g. rice farming in S.E. Asia Extensive farms have a low input and output per hectare high yield is produced by covering large areas of often low grade land but with few workers e.g. a hill sheep farm- maybe only one farmer is needed to look after a large amount of sheep- do not need that much looking after Subsistence farming where produce is mainly grown for the use of the farmer surplus may be sold to buy other goods many subsistence farmers are very poor but this is not always the case- shifting cultivation is also an example of subsistence farming Commercial farming farming on a large-scales producing food to be sold Market gardening farming using greenhouses to produce fruit and vegetables Sedentary farming farming where the farmer remains settled in one place Nomadic farming farming where the farmer does not stay settled in one place e.g. shifting cultivation CHANGES TO FARMING * More tractors- less horses * Machinery- eliminate back-breaking jobs Combine harvester- saves time and labour * Farming ...read more.

fertile silt to grow the rice but sometimes disaster strikes when the floods are so severe that they destroy the rice crop o Drought- in some years the monsoon rain fails o Shortage of land and growing population- many farms are too small to support the family, and the ever-increasing population makes the situation worse because food shortage is a problem o Little use of machinery or modern methods o The majority of the best farmland is held by a few wealthy landowners o Many of the poorer farm labourers have no land at all and work in a latifundia system where they rent small plots, giving away 60% of their outputs to the landlord and in addition having to work on the landowner's land for free LOCATION OF INDUSTRY * Decision makers: o Entrepreneurs o Private firms o TNCs o National government o Local planners * Physical factors: o Raw materials- steel-located close to iron ore/coal fields o Power- close to coal fields/rivers o Natural route- river/natural harbour o Site- river/above level of flooding * Human factors: o Labour- availability and skills o Capital- money available o Markets- located near where it will be sold- saves transport costs o Transport- canals, roads, railways, airports o Economies of scale- cheaper to manufacture on a larger scale o Government policies- planning restrictions or can encourage by offering subsidies and grants o Technology o Leisure facilities- nice surroundings- attracts best workers ...read more.

need for protecting remaining natural resources KENYA-TOURISM IN AN LEDC * Savanna * Beaches * Big game animals * Coral reefs * Mountains and lakes * Tropical climate * Safari tours * National parks * Game reserves * Cultures- crafts, dancing, festivals, way of life, tribes- Masai * Conservation projects * Hot air balloons * Water sports * Glass bottom boat tours * Kenya, in East Africa relies heavily on tourism which is its biggest earner of foreign exchange with over 1 million visitors per year and over �50 million earned in tourism spending * Tourism has created all year round jobs for people and has helped develop people's business skills * Tourism has also stimulated farming by creating a demand for local food. In addition the natural environment has benefited through the creation of national parks (such as Nakuru) to protect the countries natural assets * However there is some leakage of income and a lot of the money paid for holidays to foreign owned tour companies never reaches Kenya * Large volumes of tourists can affect the environment. In parks such as the Maasai Mara, large numbers of safari minibuses cause soil erosion and disturb the animals, whilst in coastal areas such as Mombasa, unique coral reef ecosystems are being destroyed * In some areas differences in culture between the locals and tourists have become an issue and there has been an increase in drugs and crime. ...read more.